More than 85% of new Canadian jobs came from one place: Alberta

OTTAWA — When it comes to job creation in Canada, there’s Alberta and then there’s everybody else.
The latest employment data for February showed that the oil-rich western province created an impressive 18,800 jobs, largely in construction, mining and oil and gas, while in the rest of the country overall employment fell.
Economists warn against staking too much on any one-month data point, but the February result is no outlier. 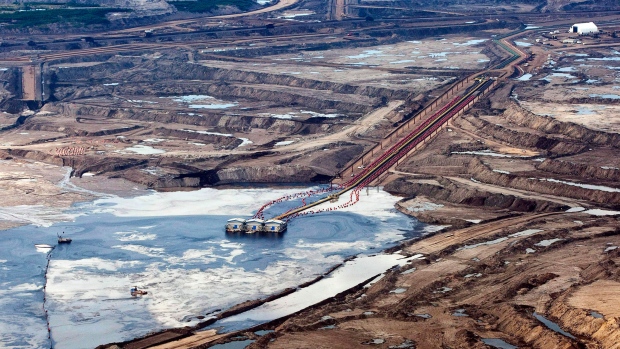 An oil sands facility seen from a helicopter near Fort McMurray, Alta., on July 10, 2012. (Jeff McIntosh / THE CANADIAN PRESS)
As the Statistics Canada report issued Friday showed, Alberta is responsible for almost all the new net jobs generated in the past year — 82,300 of the 94,700 country-wide, or 87 per cent — as the province saw employment rise an impressive 3.8 per cent.
By comparison, provinces not called Alberta only gained about 12,000 which, for the purposes of the agency’s survey, constitutes a rounding error.
“I know this is not a new story but it’s becoming extreme,” said Doug Porter, the Bank of Montreal’s chief economist. “In the last 12 months, Alberta is the only province that’s seen meaningful growth. They’ve had job gains of nearly four per cent and meanwhile six provinces have seen declines and one’s been flat.”
The other provinces in the positive territory, although far below Alberta’s bounty, are Ontario with an overall pickup of 28,700, which given the large population base is only an increase of 0.4 per cent, and Saskatchewan, where employment rose a healthier 0.9 per cent by adding 5,200 net new jobs.
One way of looking at, says CIBC chief economist Avery Shenfeld, is that the labour market in Canada is working as it should. Canadians are moving to where the jobs are.
And the numbers do show that aside from creating jobs, the western province is steadily increasing its workforce, by 81,300 in the past 12 months alone.
But Shenfeld concedes it’s a serious problem for provincial governments that are on the losing end of worker migration, sapping their ability to raise revenue and pay for services. While most provinces remain in deficit, Alberta on Thursday reported it would post a surplus this year, although some quibbled with the province’s accounting practices.
A spokesperson from the Finance Department said the post-recession period, where over one million jobs have been created, does not show as dramatic a tilt toward Alberta, but added that in general the strong performance of the province’s economy since 2009 has been “a positive thing for Canada.”
Although the recent dramatic tilt may be exaggerated by cyclical factors, the direction of jobs flow has been apparent for some time.
With Canada’s manufacturing sector on its knees and home construction tapped out, two of the biggest industries operating in heavily-populated Central Canada have essentially produced no net jobs in the past year.
And another big employer — government — has shed more than 41,000 workers as Ottawa and other non-resource provinces focus on eliminating deficits.
“These figures illustrate the folly of imposing public-service cuts on a stagnant job market,” said Erin Weir, an economist with the United Steelworkers.
Canadian Labour Congress economist Angella MacEwen said there are essentially two labour markets in Canada, that one in Alberta and Saskatchewan, and the one in rest of Canada.
“The first thing to recognize is that there’s a problem,” she said, “because if we recognize what is happening, then the problem in Ontario, Quebec, the Atlantic provinces and B.C. looks much worse.”
She and other labour economists are calling for governments to become more involved in the economy by spending on infrastructure, the green economy and other measures that, in the long run, create the conditions for economic expansion and hiring, adding that she would like to see Ottawa establish a forum with business and unions to thrash out ideas.
That would help, agrees Porter, but doesn’t recommend governments going into deep debt to try and engineer a short-term fix. He notes the last federal budget did contain some measures that should help in the long term, including money for the Champlain Bridge in Quebec and the Windsor-Detroit bridge, along with money for the auto industry.
“If you treat it as something you try and accomplish in a short period of time, the results are only going to last a short period of time,” he said.
In a speech earlier in the week, Bank of Canada deputy governor John Murray expressed some confusion about the economy’s behaviour of late, acknowledging that it “has not been unfolding exactly as we had expected.”
At the heart of the problem is that non-commodity exports, mostly manufactured goods, have been unusually weak given the strengthening global growth, he said.
And business investment has been soft despite “healthy corporate balance sheets,” what former governor Mark Carney called the “dead money” problem.
The federal government has done its bit, Carney had observed, cutting corporate income taxes, but the bounty had not been put to work to expand and create jobs.
Carney’s observation is now several years old, but while current Bank of Canada governor Stephen Poloz continues to point to what he calls the “rotation” from housing-driven growth to exports and investment, that still has yet to materialize.
Shenfeld believes the weaker Canadian dollar, once the new level at about 90 cents US has had a chance to flow through the system, will help elevate exports and create more jobs in the manufacturing sector. A robust U.S. recovery is also critical, something that is out of the hands of Canadian policy-makers.
As well, he says that given that gross domestic product growth has been stronger in the second half of 2013 than job creation, he believes there might be some catch-up going forward.
But the underlying truth will remain, he says, that given the global demand for resources, “the West is best” theme will continue in Canada for some time.