When developers engage with visual artists, the result is a unique legacy for the community they’re building in and for the city as a whole. 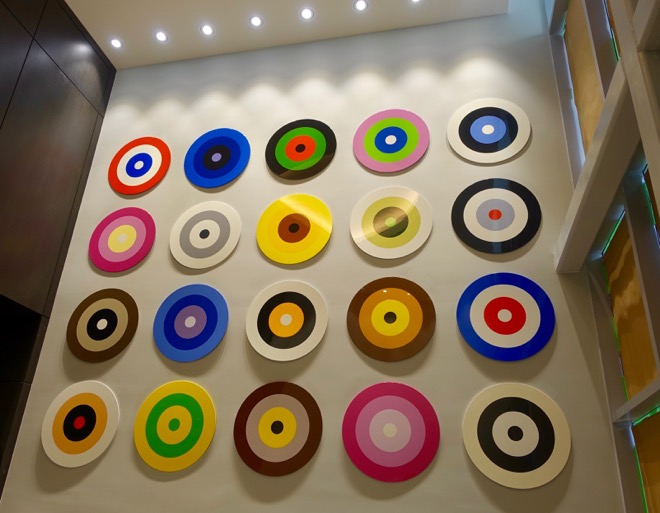 Douglas Coupland’s large-scale art piece in the lobby of MARK on 10th.

Qualex-Landmark™, the developer behind the Mark On 10th condominium tower at the corner of 10th Avenue and 8th Street S.W. in the Beltline neighbourhood, took a more high-minded approach in their artistic engagement, commissioning a large-scale original work by luminary Canadian artist Douglas Coupland for the building’s lobby.
Titled “An Interpretation of Calgary, Alberta in the 21st Century,” the arrangement of 20 multi-coloured bulls-eye forms is, in Coupland’s words “a distillation of Calgary that is both part of the modern world, yet also eternal” and “a work that engages the viewer in an ongoing challenge to identify and remember what is depicted — almost like a chocolate box and its map.”
According to Coupland, these forms “become signs that will, across time, mellow and ripen within a viewer’s memory, also acting as a smart and anticipated ‘welcome home’ moment.” Installed on the pristine wall of the lobby, it’s both an impressive work with an instinctive sense of place.
While Qualex-Landmark has several Vancouver projects featuring commissioned artworks in its portfolio, none have been to the scale of the Coupland commission, says Parham Mahboubi, the company’s vice president of planning and marketing. According to Mahboubi, the company was introduced to Coupland through a mutual colleague while Mark was in the early design phase and proceeded from there. “It quickly became apparent that the largescale Coupland art piece was going to be an outstanding addition to the project,” he says.
There’s status inherent in having a gallery-calibre installation by a recognized Canadian artist in the lobby of your building, but the decision to go the extra mile was also seen as a way to engage with the burgeoning “Design District” area that Mark on 10th anchors.
In a statement provided by Mahboubi, Qualex-Landmark president Mohammed Esfahani said that the company’s vision for Mark on 10th was “not only about the building, but also about the neighbourhood,” a sentiment echoed by the project’s lead architect, Foad Rafii, who said that “with the incorporation of the art piece as a central feature of the Mark lobby, we were not only contributing our part in promoting the arts in the emerging design district, we were also infusing a new energy and vibrancy into the building.”
It would have been much easier and more cost-effective for Qualex-Landmark to forego the commission, however, Mahboubi says the Coupland artwork was “one of several key selling points of the project,” which was completed last spring and is listed as sold out. “We have found that when the opportunity has arisen, introducing a unique piece of art designed by a reputable artist has so far been generally well received by homeowners and has been a positive contribution to the project and the neighbourhood,” he said.