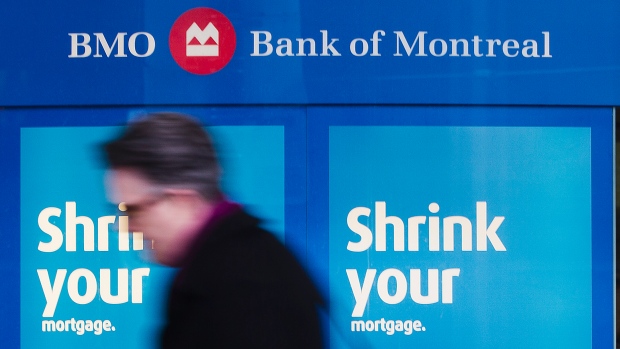 Bank of Montreal announced Tuesday is it trimming the rate on one of its five-year mortgages, and TD said it would follow.

Bank of Montreal has lowered its five-year fixed mortgage rate to 2.79 per cent from 2.99 per cent, effective immediately.
That’s the lowest posted five-year mortgage rate by one of the so-called Big Five Canadian banks ever, according to RateSupermarket.ca

“This is historically the lowest a federally regulated lender has gone on a five-year term,” Penelope Graham with the mortgage pricing website said. “It’s a big deal.”

Graham said major lenders have a recent tradition of cutting their rate this time of year, in the leadup to the key spring home buying season. And more often than not it’s BMO that moves first.

“This is the time of year when lenders get competitive about pricing,” Graham said. “Speaking from precedent, what we’ve seen in the past is that the others don’t immediately rush to match. But there’s nothing to say they won’t this year.”

Although it’s precedent setting, it’s not the lowest rate out there, as alternative lenders have been pricing at that level and below for several years, because they have to charge less to break the hold the bigger lenders have in terms of branding and trust.

Currently, the lowest five-year posted rate in Ontario is 2.59 per cent from several lenders, including Dominion Lending Centres and True North Mortgages.

“The mortgage rate war has been happening for three years now,” Graham said. “Brokers and smaller lenders, we’ve been seeing this pricing for several years to be honest.”

The rate cut comes ahead of the key spring real estate season. The latest numbers from the Canadian Real Estate Association show that Canada’s housing market continues to crank out gains, with the average price up more than six per cent to over $430,000 last month.

Those gains are coming at least in part on the back of lower rates, which have been compelling Canadians to buy more houses at lower than usual interest rates.

BMO is the first of Canada’s big banks to significantly alter its benchmark interest rate since the Bank of Canada surprised markets with an unexpected rate cut in January.

Bank of Canada may move to cut rates again, TD says. More than two-thirds of mortgage-holders opt for a fixed rate term, the Canadian Association of Mortgage Professionals said, and within that, five-year terms have been the dominant standard for some time.

Aside from its key five-year rate, BMO left its other rates unchanged Tuesday.

By: Pete Evans of CBC News