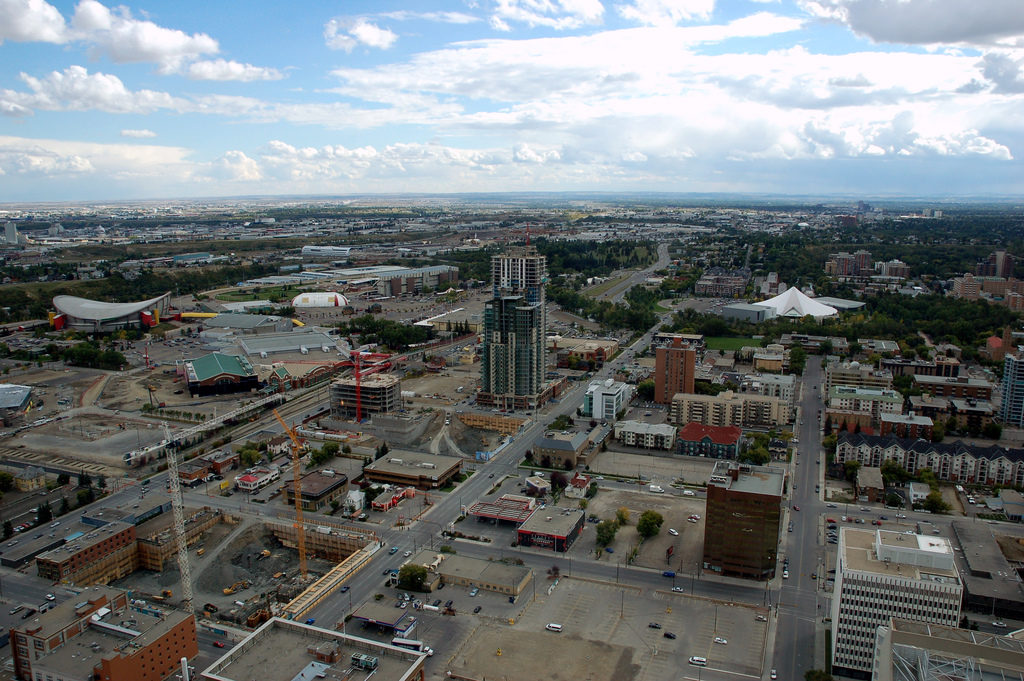 Calgary’s housing market continues to struggle, but one real estate-related index could signify renewed confidence in the western Canadian city.

According to the latest RLB Crane Index, which twice a year tracks the number of cranes in 13 major North American cities, there are more cranes set up in Calgary than in New York.

With 26 cranes in the city as of June, Calgary tied with San Francisco for seventh on the index, while New York had 20. At last count in November, Calgary claimed 22 cranes to its name.

“We think the crane count is a good reflection of things that are actually underway, so it shows that [there’s] confidence in the market and that these projects have buyers,” Joe Pendlebury, senior vice president of RLB, a construction-advisory company, tells Livabl.
Industrial construction of large warehouses has boosted the number of cranes in the city of late, as have civic projects.

“A couple recreation centres are being built, and that’s the government still trying to build facilities to… stimulate the economy,” Pendlebury explains. However, two-thirds of the construction activity in Calgary that RLB recently observed is related to multi-family residential buildings. “With 6,500 units currently underway, 18 cranes are dedicated to this sector,” according to the RLB Crane Index.
Pendlebury expects residential construction will “keep climbing” in Calgary. Construction spending in Toronto, a city which has now climbed atop the index for the third time in row, is also expected to increase moving forward.

The city’s 97 cranes were an increase from the 88 RLB reported in November. “Looking ahead, Toronto is expected to see a boost in spending on infrastructure, which is anticipated to trigger an increase in construction activity,” says RLB. “More than 400 high-rise projects have been proposed, adding to the city’s dynamic skyline.”

With 65 cranes, Seattle was the city to come closest to Toronto’s total.

View the article online by Josh Sherman for  Livabl.