Calgary Ranked Among Top 5 Most Liveable Cities in the World

The best places to live:

A data-driven ranking of the most liveable cities 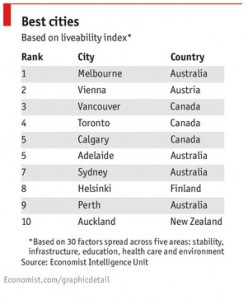 NOT New York nor Paris nor Tokyo. Urbanites in Britain’s former dominions should count themselves lucky, according to data from the Economist Intelligence Unit, our corporate cousin. Its annual “liveability index” puts eight of the ten most comfortable places in Australia, Canada or New Zealand. The index crunches 30 factors related to things like safety, healthcare, educational resources, infrastructure and environment in 140 cities. Over the past five years urban life has deteriorated somewhat: liveability has declined in 51 places and improved in 31 places. During that time, the index average has dropped 0.7 percentage points (skewed by cities in conflict areas where survival, rather than living well, is the priority). Interestingly, the top cities have not changed much over time. The EIU notes that they “tend to be mid-sized cities in wealthier countries with a relatively low population density.” Hence those of us in London, San Francisco and Shanghai must endure the rat-race, and dream of dwelling amid Viennese coffee houses or Vancouver’s sailing and skiing.