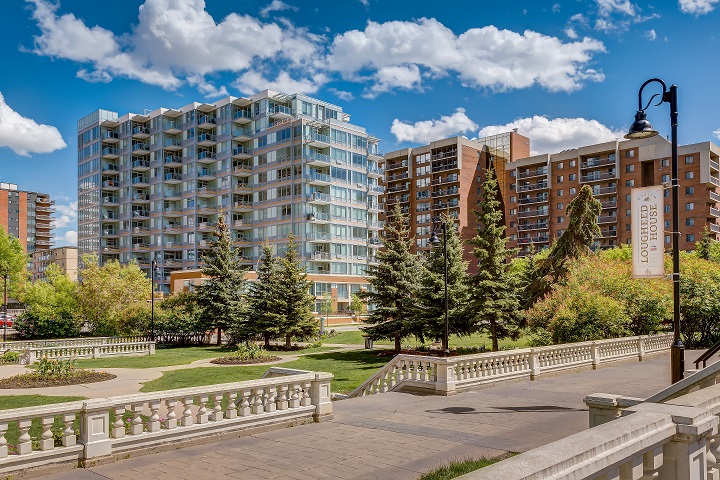 Too often Calgary’s downtown and Beltline are negatively portrayed as a jungle of concrete and glass when in reality, there are numerous parks and gardens that make it a very attractive place to live. Sometimes it takes outsiders see this. For example, Vancouver based Qualex-Landmark saw the potential to create something special on a site just east of the historic Lougheed House and Beaulieu Gardens and just a nine iron from the century old Ranchman’s Club. The result a charming condo called Calla.

Located in the heart of the Beltline at 14th Avenue and 6th Street S.W., Calla is in a residential enclave with a mix of old homes, small walk-up apartments, as well as mid-rise apartments and condos. It sits on a quiet, tree-canopied street that could easily be a postcard for idyllic urban living.

Its neighbour to the west is the 1891 Lougheed House christened with the regal name Beaulieu — or Beautiful Place — which inspired Calla’s design. That sandstone home was built on a 2.8-acre site on the southwest edge of downtown as a powerful symbol of Lougheed’s growing prestige and influence that would continue for the next 100 years. By the early 1900s, the estate included the residence, carriage house and stable, as well as a formal garden complete with swan sculpture fountain. Backstory, Sir James and Lady Isabella Lougheed often entertained royal guests at Beaulieu, including the Duke and Duchess of Connaught (the community around Beaulieu was named Connaught until 2003 when Connaught and Victoria Park communities merged to form the Beltline community) and their daughter, Princess Patricia, as well as the Duke of Windsor (when he was the Prince of Wales). Beaulieu remains one of the finest and last remaining sandstone residences in Alberta. If you haven’t yet been to the Lougheed house and gardens it is a “must see.”

Unlike most new Beltline condos with 18+ storeys, the 12-storey Calla fits right in with its mid-century four- to 12-storey neighbour apartment and condos. At the same time, it makes its own architectural statement, with its terraced massing (Beaulieu Gardens also are terraced), floor-to-ceiling windows and glass balconies, contrasting with the mostly brick and concrete facades of its neighbours. Vancouver’s Rafii Architects have created a chic, clean, contemporary building that adds a new dimension to the streetscape, as well as the skyline for those living in the heart of the Beltline. It even has park homes (rather than townhomes) that open up right onto a 2.8-acre sanctuary of peace and tranquility in the middle of the Beltline.
Calla is like a magnificent greenhouse, which is appropriate given it is adjacent to the beautiful historic Beaulieu Garden. The Garden is noteworthy for its plant material that is historically accurate to the 1891 to 1925 period. It is no coincidence that the condo was named after the flower Calla Lily, “calla” derived from the Greek word meaning “magnificent beauty.” Indeed, Calla serves to link the beauty and ambition of Calgary`s past to that of its future.