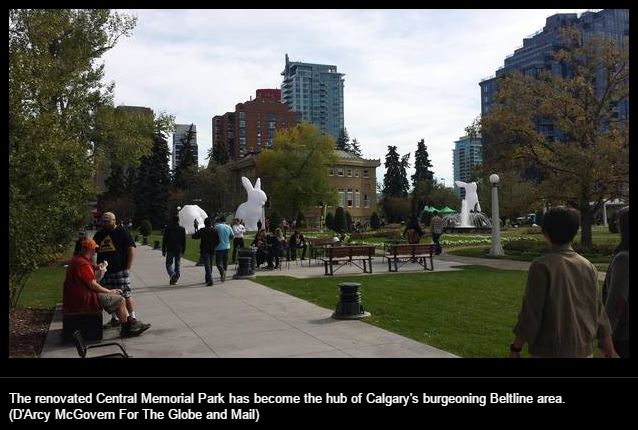 Grosvenor Ltd., the international property firm owned by the Duke of Westminster, this week acquired its third site in Calgary’s Beltline district, paying $8.25-million for a 26,000-square-foot lot at 1405 4th St. SW, currently a confectionery store and health food market. The company says it plans a mixed-use development that will include residential, office and commercial space.

The investment is just the latest instance of continued developer interest in investing in downtown sites, even as the city’s economy weathers depressed oil prices.

The 4th Street property drew a lot of interest, says Agron Miloti of commercial property broker Newmark Knight Frank Devencore. “We had more than 20 offers on the table for this site – which is impressive even for Beltline, which is very desirable right now.” Grosvenor wasn’t the first developer to the table, but they were the best suited to unlock the site’s potential.

“Competition is huge,” Mr. Miloti says. “Developers all over Canada are looking to invest in Calgary. The city’s on a down cycle as far as the economy goes, but demand for sites like these hasn’t waned at all. The only issue is that Beltline sites are generally small, so assembling them into areas for development can be tricky.”

Newmark Knight Frank Devencore also brokered a deal with Grosvenor for the apartment building behind the site, increasing its overall potential.

Mr. Miloti, a broker in the city for 30 years, believes Beltline is a winning opportunity for a number of reasons.
“The location is superb; it’s walkable to downtown and to 17th Avenue, which is a hive of restaurants and bars. The downtown population is growing and demand for downtown property is still rising.”

Enjoying the halo effect of developments such as the city’s East Village, which is fuelling renewed interest in downtown living, Beltline is the “obvious choice” for investors looking ahead to the “inevitable economic recovery,” says Rob Duteau, Grosvenor’s senior vice-president.

Mr. Duteau says it’s early days for this particular site, but the development could include a residential tower up to 35 storeys high. A “substantial” retail component is planned for the 4th Street frontage, while residential and office space will take up the 14th Avenue side. The whole development will have a “heritage” look and feel in keeping with the historic neighbourhood.
The changing profile of Beltline dwellers is a key reason developers such as Grosvenor are crowding in to stake their claim.
“Beltline saw population growth of 4 per cent a year between 2010 and 2014, the average age of residents is just 33 and nearly 98 per cent of homes there are apartments,” Mr. Duteau says. “These buyers are making a lifestyle decision which has very little to do with the price of oil.”

Other developers – such as Vancouver-based Qualex-Landmark, which recently broke ground on their sixth Beltline condo tower, and local developer Wexford – are also in the race to secure, develop and sell sites as quickly as possible to meet the growing demand for downtown living.

Both of Grosvenor’s other downtown developments – Avenue, a two-tower West End project being built in partnership with Cressey Development Group, and Smith at 15th Avenue SW in the Beltline – are now well above ground and more than half sold. Another residential development in Calgary, Drake, was completed in 2013.
Mr. Duteau believes sales for the new site could commence as early as the first quarter of 2017.