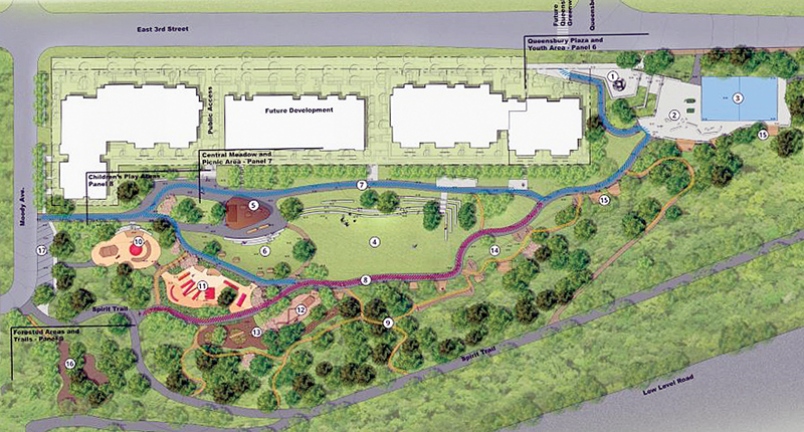 A referendum was averted and the first major component of the new Moodyville inched closer to reality at a March 6 City of North Vancouver council meeting.
The development, dubbed Green on Queensbury, would put 157 apartments and townhouses into a trio of four-storey buildings on East Third Street. However, the Qualex-Landmark project could have been waylaid if 10 per cent of the city’s voters filled out a form opposing the development’s integral land exchange.
Three residents filled out the opposition form before the Feb. 27 deadline, short of the 3,620 necessary to trigger a referendum.
Council voted 4-2 to back the alternative approval process, despite Coun. Rod Clark blasting it as a “negative petition.”
The proposed land swap would give the city a swath of property on the 800 block of East Third Street and the developer would get a plot of city-owned land to the east and south of the 700 block.
The city could expand Moodyville Park and improve the connection to the Spirit Trail if the deal is approved, according to city staff.
The lane south of the 700 block and the road at the foot of Queensbury would be closed. The project is scheduled to go to public hearing March 27.
If the development is approved, two 1941-era heritage homes would be demolished. The decision to demolish was reached after the developer was stymied in their attempt to relocate the wartime homes.
The project also includes  a $2.5-million revitalization of Moodyville Park, funded by Qualex-Landmark.
Following neighbourhood outcry over expansion on nearby Port of Vancouver land, City of North Vancouver council approved a massive rezoning of Moodyville. The neighbourhood concept quadruples the population and substitutes 1,890 wood-frame townhouses for the bungalows that have characterized the area’s architecture since the Second World War.
The transition has been somewhat troubled as three vacant homes caught fire between November and February. At least one blaze was likely the result of a squatter trying to stay warm, according to City of North Vancouver Fire Department Chief Dan Pistilli.
North Vancouver RCMP have also increased patrols in the area, according to spokesman Cpl. Richard De Jong.
Qualex-Landmark has assembled 14 privately owned lots on the 700 and 800 blocks of East Third Street.
The biggest land assembly in Moodyville was undertaken by Seacliff Properties and includes 52 lots over 8.5 acres slated to become 340 townhouse units.
The city is set to take in $30.8 million through density bonus contributions and development cost charges from Moodyville projects. Approximately one-third of that money is earmarked for utility upgrades and neighbourhood features but the rest could go toward Harry Jerome Recreation Centre or other city projects, according to a staff report.
Written by: Jeremy Shepherd of North Shore News
Date: March 14, 2017
Like what you see? Share this article!