From Mideast to Metro Vancouver, a developer’s story 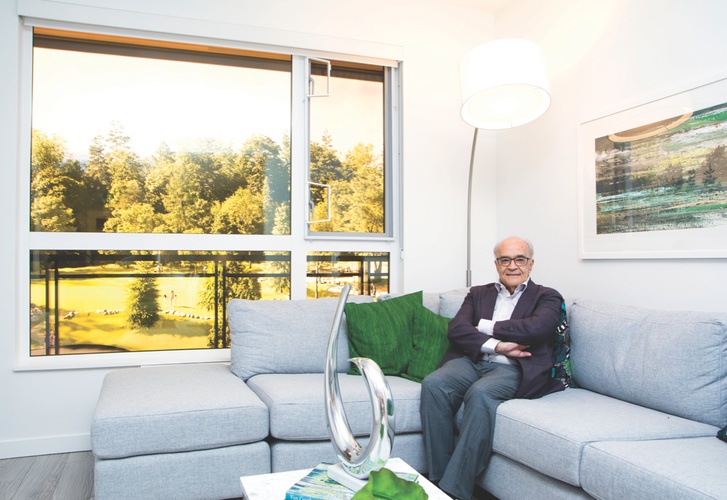 Amber sunlight sifts onto Melville Street below where Mohammed Esfahani, president of Qualex-Landmark Group, has his office. The company, he said, is a boutique developer, and while Vancouver wrestles with big-picture issues of supply, he prefers to work at a human scale.

Qualex-Landmark recently launched Green, a project in North Vancouver’s emerging Moodyville neighbourhood. By the time this story appears, the development will likely be sold out. But as Esfahani reviewed the materials specified for the project, he questioned the planned use of hollow-core doors – couldn’t they be solid?

“I decided to change it because I think people should get the best for their money,” he said, adding that the building will also have air conditioning – something unheard of in most condo projects.”

An idiosyncratic attention to detail informs each project, and each decision. Esfahani’s disarming candour deepens when he’s asked about his motivating philosophy and guiding principles.

“My conscience,” he said, simply. “I’m a practical person.… I don’t like to be good because I’m given the promise of going to heaven; I think it’s good to be good for being good.”

And good, for him, means being human. He speaks fondly of the 3,000 years of history underpinning his home city of Tehran, and his respect for the warmth and hospitality of the culture. It’s something that backstops his approach to business, and he looks for it in others.

“I want a person to be human before his expertise. Anyone is trainable, but if he is not human, you cannot train him.”

Esfahani’s own training groomed him for a professional career, but it led to a new life in North America.

Born in 1943, he attended high school in Tehran and then in 1963 he emigrated to the U.S. He spent a year studying English in Washington, D.C., before joining a friend at the University of Wisconsin-Madison, where he studied civil engineering – and where the climate gave him wanderlust.

“It was so darn cold that I ran away,” he said.

When he graduated, he joined another friend, this time in Oklahoma, which had weather like Tehran’s. He stayed, graduating with a master’s degree in construction management. Work in Kansas City, Missouri, followed before he returned to Iran in 1969, becoming supervisor for a general contractor. His first project was an airport terminal.

A year later, Esfahani and two other men from the company launched their own firm.

“We got some jobs, then after that the other two partners parted – they wanted to go back and be employed. So I kept the company,” he recalled.

“Then the revolution happened,” he said.

Hopes for the new government gradually fell away, and Esfahani returned to the U.S. in 1983, settling first in San Francisco. Construction was familiar work, so he began building townhouses.

“Four of them sold for tons of profit, and the other four took away all the profit and we lost money,” he said. “Then I went to New York with another friend who was doing trading, importing stuff from South America – pulse, beans and stuff – and distributing it throughout the U.S.”

Esfahani wanted to be doing something practical, however. A visit to yet another friend in Canada in 1985 brought him to Vancouver. It was a turning point.

“I love places that I like the people,” he said. “I loved it here so much that I thought, if I’m going to choose a second home, it’s going to be Vancouver.”

Visiting show suites educated him about local development people here wanted, and he began learning the ropes. But when the man who once sold him tower cranes back in Iran asked him to join on a local development, Esfahani hesitated.

Esfahani soon had four projects under his belt, and in 1995 he launched Landmark Projects Inc. It wasn’t easy, but he was encouraged by the words of international developer Amir Malek (Malek’s sons Peter and Shahram run Millennium Development Corp.).

Landmark’s first project was Rivergate, a 39-unit mid-rise residential development at Jellicoe Street and Kent Avenue in Vancouver. Completed in 1997, “it was too insignificant to be called something,” he said. But it was a start.

Esfahani joined forces with fellow engineer Reza Navabi in 2002, forming a partnership that lasted until Navabi’s sudden death this spring. Navabi had his own development firm, Qualex, and under the Qualex-Landmark name the men began tackling more ambitious projects beginning with Domus, then Pomaria, the first Leadership in Energy and Environmental Design-certified residential tower in Vancouver. The group walked away from an ambitious $500 million project in Squamish when the terms changed (“We would have been bankrupt, for sure,” Esfahani said, shaking his head), but it soon began the first of what are now six towers in Calgary.

“Things happen for a reason,” he said.

But he comes back to the importance of letting things not happen, too.

He acknowledged that money is important in getting things done, but, he added, he doesn’t want to mortgage his life. While he’s got plenty of projects to keep him busy in both Alberta and B.C., including a site in Dunbar he wants to develop for people to downsize within the neighbourhood, Esfahani said there’s more to life than feeding the machine that work can so easily become.

The joy he takes in his wife of 45 years, Maryam, and their children and grandchildren are worth a lot more.

“So what if I build another three, four, five highrises before my life ends, or what if I travel around the world a couple more times? So what? These kids bring joy to my life,” he said.

It’s a joy he brings to his work.

“I enjoy my work – as long as my body takes me, I will work. I would rather have a heart attack behind my desk than at a resort,” he said. “Honestly, if you like your job, and you like the people you work around, this is fun. This is a holiday.”

Story by Peter Mltham of Business in Vancouver