It’s a thought that percolates through the minds of everyone taking the downsizing plunge: will there be enough space for all of the “stuff?” 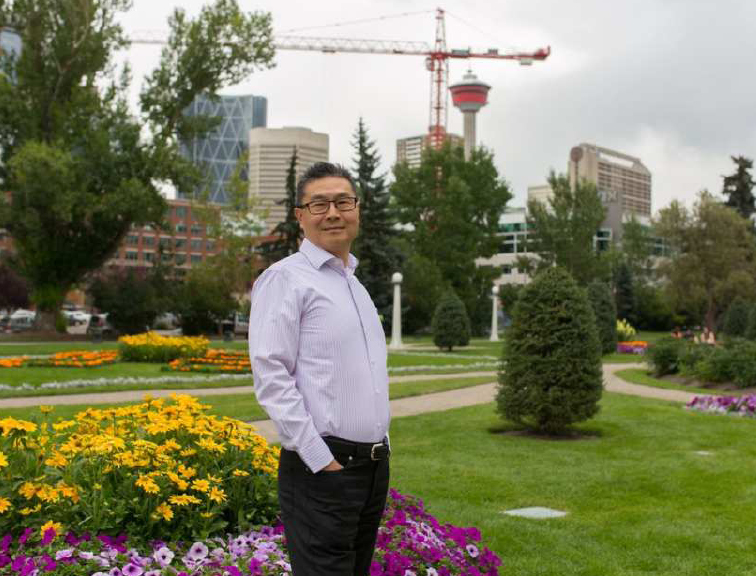 Ron Lim is looking forward to living in his new home at Park Point, which is across the street from Central Memorial Park. Photo by Adrian Shellard, Calgary Herald

Certainly the question was top of mind for Ron Lim as he was shopping for a home that would suit his downsizing needs. “I’m going to be moving from a 2,600-square-foot custom designed home that has everything I like for my lifestyle from a home gym to a sauna,” he says. “So replicating that was a bit challenging.”

But he found everything he was looking for at Park Point in Calgary’s Beltline area. He initially purchased a two-bedroom, two-bathroom design with a square footage hovering around the 1,000 square foot mark.

After making the decision, Lim sat in the two-bedroom show suite at the presentation centre, mulling over the logistics of where all of his stuff would go. “I thought to myself: could I actually downsize into this two-bedroom and realized that only two-thirds of my things would fit.”
That’s when he approached the sales team with the concept of blending a one-bedroom and two-bedroom condominium to create a three-bedroom, three-bathroom design that measures in at close to 1,700 square feet. The new design features an open-concept with almost 400 square feet of outdoor terrace space. “Now, I think about this as my long-term home,” says Lim, who at 57 is ready to make the leap to the “lock and leave” lifestyle.
He is planning on winding down his workload over the next few years, allowing him more time to downhill ski — he has a home in Fernie, B.C. — and to spend more time in Mexico, where he also has a vacation home.
The concept of blending two suites to create a new plan with greater square footage is one that has had worked well in several other large cosmopolitan cities. “We’ve experimented with this concept in Vancouver, but this is the first time that we have implemented it in one of our residential projects in Calgary,” says Parham Mahboubi, vice-president of planning and marketing for Qualex-Landmark, the developer behind the project.
Despite the economic downturn, Qualex-Landmark remains confident that Calgary’s real estate market is on the road to recovery. Mahboubi says that sales have been strong — over 50 per cent of the project is sold. “The difference is that it is taking buyers a bit more time to make the decision. It certainly takes more frequent visits to the discovery centre, but we are seeing a steady flow of visitors, continued sales and record low rescissions.”
Lim admits that he did his due diligence when it came to his home buying decision and didn’t jump right in. He’d been looking at inner-city projects for a while, and chose Park Point for a myriad of reasons, starting with its location close to the restaurants of 17th Avenue and shopping at the core. And Lim, who is a physician specializing in mental health and addictions, works just kitty corner from the project, at the Sheldon M. Chumir Health Centre and Urgent Care Unit.
“That was a huge draw,” he says.
Lim also appreciates the esthetic qualities of the project and the ample amenities like a yoga/Pilates studio and a gym. The full-service concierge also was a big plus. “Now there is someone who can collect my packages and let the plumber or painter in – I won’t have to take a day off of work,” he says, adding that the convenience of having a concierge service will be life-changing in such a good way. 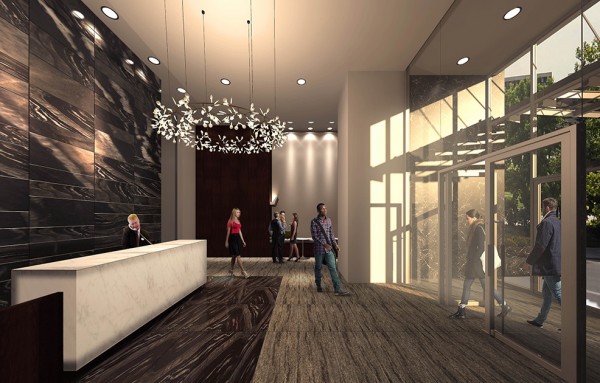 Designed by IBI Group Architects in Vancouver, Park Point’s visual expression emulates an exclamation mark where the ground level lobby is the dot. The facade reflects a staggered juxtaposition of black and white with the black flowing from the top downwards towards the two-storey lobby, which is framed in solid black granite.

The south facade of Park Point spills onto Central Memorial Park. “It’s really Calgary’s Central Park,” says Lim, gesturing to the sculpted flowerbeds, manicured lawns and century-old pine trees saturating the landscape with bold fuchsias, crimsons, cobalts and lilacs.
The interior spaces offer clean, modernist lines replete with granite-clad feature walls and waterfall countertops. Flat-profile textured wood cabinetry extends full-height in the kitchen space. Keeping the look congruous, the refrigerator’s facade is also clothed in the same textured wood paneling.
“The kitchen was a big pull for me,” says Lim. He says the level of finishing including the panelled fridge have a very similar feel to the look that he had custom-created in his single family home in Calgary’s southwest community of Kelvin Grove. Lim says that the high level of finishing and the ability to tailor a floor plan to suit his lifestyle needs really cinched the deal.
“This is the right place for me. It’s got everything I want and I’m excited.”
For more information, please visit qualex.ca/parkpoint