Qualex-Landmark™ Raises Architectural Style in the Beltline with Park Point 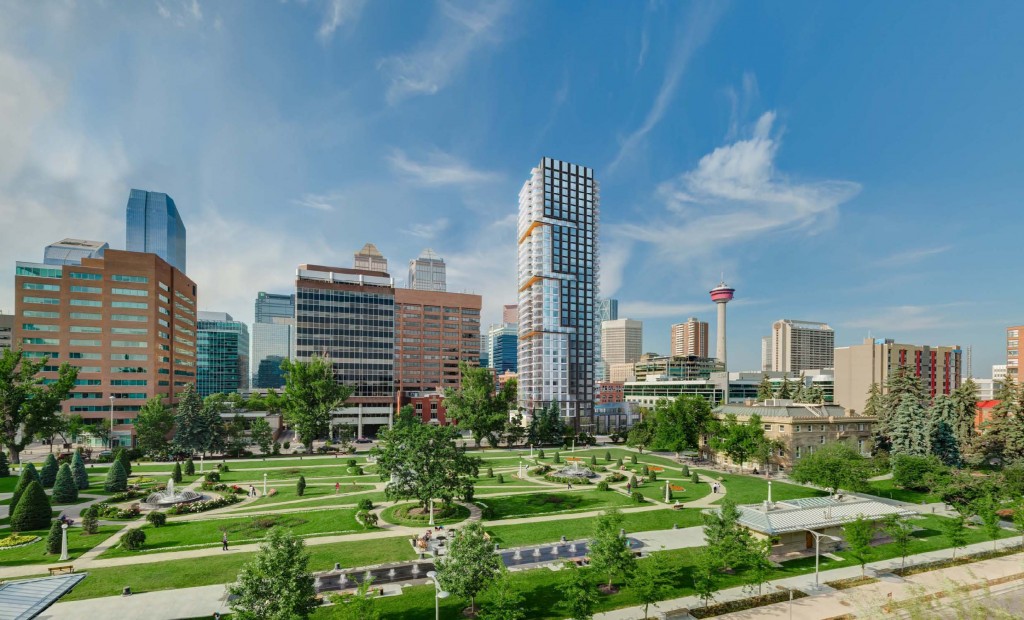 PARK POINT not only adds to the aesthetic beauty of the inner city it also brings the ultimate urban lifestyle to the mix.

Architectural diversity has been one of the most positive outcomes of the revitalization of Calgary’s downtown core. From East Village to the West End, the new spires of gleaming residential condos in the inner-city have added glamour and sophistication to Calgary’s soaring skyline.

Vancouver-based developer Qualex-Landmark™ has been instrumental in this architectural rejuvenation, accounting for five of the most iconic residential high-rises in the Beltline area over the past 10 years. And with their latest tower, PARK POINT, the first of a two-tower residential development project, they cement their reputation as Calgary’s most prolific condo innovators.

PARK POINT offers a modern interpretation on living in downtown and with a strong architectural vision, it “will permanently alter the skyline of Calgary’s Beltline community,” says Mohammed Esfahani, president of Qualex-Landmark™.
“PARK POINT‘s strikingly unique architectural façade will be the landmark of the neighbourhood, as it will be the tallest building in the immediate vicinity,” he adds. Designed by global architectural firm IBI Group that redesigned the CN Tower Plaza and the Residences at Hotel Georgia in Vancouver PARK POINT‘s first residential tower at 34-storeys, features a sophisticated sculptural expression and contemporary style. Located on the corner of 12th Avenue and 2nd Street S.W., its soaring beauty will have the historical Central Memorial Park as its backdrop.

An elegant double-height lobby and distinctive canopy creates a bold, yet gracious arrival. Strong vertical architecture is created as select floor plates grow in size as they ascend the building, inspiring a colour enhancing and stepped effect, adding to the prestige nature of the address.

Adding to the glamour is that each of the 289 suites will have an open-air patio or balcony to take in the unique views of the park and the city skyline. The balconies add to the uniqueness of the exterior design, creating a three-dimensional effect enhanced by the use of colour.

One and two-bedroom suites are available in a wide range of meticulously designed floor plans ranging in size from roughly 500 to over 1,600 square-feet. Starting in the $250,000s PARK POINT is sure to attract a wide variety of buyers who are looking for urban living with a sightline to everything downtown Calgary has to offer.

PARK POINT not only adds to the aesthetic beauty of the inner-city, it also brings the ultimate urban lifestyle to the mix. PARK POINT was rated 96 per cent for walkability by walkscore.com with tons of amenities nearby, making it a “Walker’s Paradise”.

It will also have retail space and live/work townhomes, which will allow residents to work from their homes and create a vibrant streetscape.

“Downtown living is becoming increasingly popular due to walkability and the convenience of access to amenities,” says Esfahani. “Residents of PARK POINT will not only have all the conceivable amenities at their fingertips, such as grocery stores,  cafés, restaurants, parks and schools, but they will also have access to fantastic amenities within the building.”

Despite the gloomy economic conditions prevailing in Calgary since the oil price slump, Qualex-Landmark™ remains optimistic that growth is still in the cards.

“PARK POINT has been quite well received by home buyers despite market conditions,” says Parham Mahboubi, vice-president for marketing and new developments. “This city has lived through numerous economic hurdles. We haven’t lost long-term faith in our market; and it may take a bit longer to get to the finish line, but we’re not in a rush. We have a long-term vision for Calgary and will continue moving forward with our projects.”

He tells Condo Living that a recent statistical analysis performed by Urban Futures concluded that Alberta “defied expectations of a collapse in employment and migration levels despite persistently low oil prices.” Qualex-Landmark™ feels strongly that Alberta, and in particular Calgary, will continue to perform well in the Canadian real estate sector, he adds. “Needless to say, our sales velocities are also a testament that Calgarians are still in the market for condos and that the urban lifestyle is still quite a very attractive option when you consider the day to day conveniences right at your fingertips.”