It was a bitter-sweet day for the team at Qualex-Landmark, the Vancouver-based developer that has staked a big claim on Calgary’s inner city for the past dozen years. Park Point, the luxurious multi-family development that it calls its flagship building, was complete and the first residents were moving in — but it was without one of its most prominent visionaries. Roger Navabi, who founded Qualex- Landmark with Mohammed Esfahani, died a year before his vision was realized. “My father was a big believer in Calgary — and this was his and Mohammed’s vision,” said Cyrus Navabi at the ribbon cutting. Added Esfahani: “This was his favourite project — and it represents our finest work, inside and out.”

The company, which has made its mark in Calgary, has been responsible for the construction of more high-rise residential communities in the Beltline than any other developer, with projects that account for close to half a billion dollars in real-estate value. More than 1,300 homes have been built since the first three projects (Stella, Nova and Luna) broke ground 12 years ago. It has also built Calla and Mark on 10th. “We have tested the resilience of Calgary, whether booming or busting,” Esfahani said. “Calgary is still an outstanding place to live and this is one of the best locations in the Beltline.”

Park Point is located directly across the street from the completely overhauled Central Memorial Park, one of the oldest urban parks in Canada. Now one of the most popular parks in the city, the area attracts people from all over.

In fact, Qualex-Landmark, with its commitment to Calgary, recently held a Movie Night at the park for visitors — and the park was full. Some 180 homeowners have moved into the 34-storey building after the official ribbon cutting last month. Park Point has 289 homes in total, including a selection of eight already-sold street level live-work townhouses and some penthouses. “We are seeing a whole spectrum of buyers,” says Parham Mahboubi, vice-president of planning and marketing, noting that fewer buyers are investors. “There are a lot of end users who are buying to live here, rather than buying as an investment.” Both one- and two-bedroom units are still available starting from the $290,000s and the $480,000s, respectively, as well as some penthouse units.

The building has a wealth of high-end amenities for residents to enjoy. A Zen terrace on a lower level includes a water feature and seating. A social lounge has seating with a fire pit and a barbecue area with a large harvest table for owners’ enjoyment. A yoga and Pilates deck overlooks Central Memorial Park and a fully equipped fitness facility has state-of-the-art equipment. Look for a vehicle, bike and dog wash area in the secured underground resident parking area, and a bicycle storage and repair station. The building has a 24-hour concierge and a furnished guest suite for out-of-town visitors. A second tower is planned for the site as well. Details of construction start and size are still in the planning stages.

View the article in PDF by Kathy McCormick for StarMetro Calgary
For final homes opportunities, contact Leah Callow, Sales Manager for details.
Want to learn more about Park Point ? Let us know!
Stay up to date with Qualex and join our mailing list here! 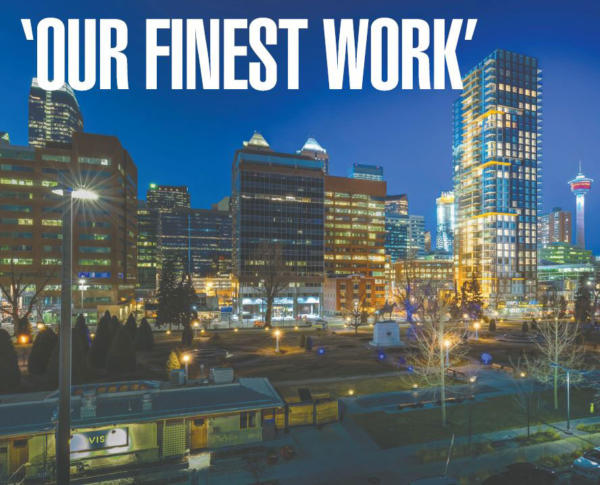