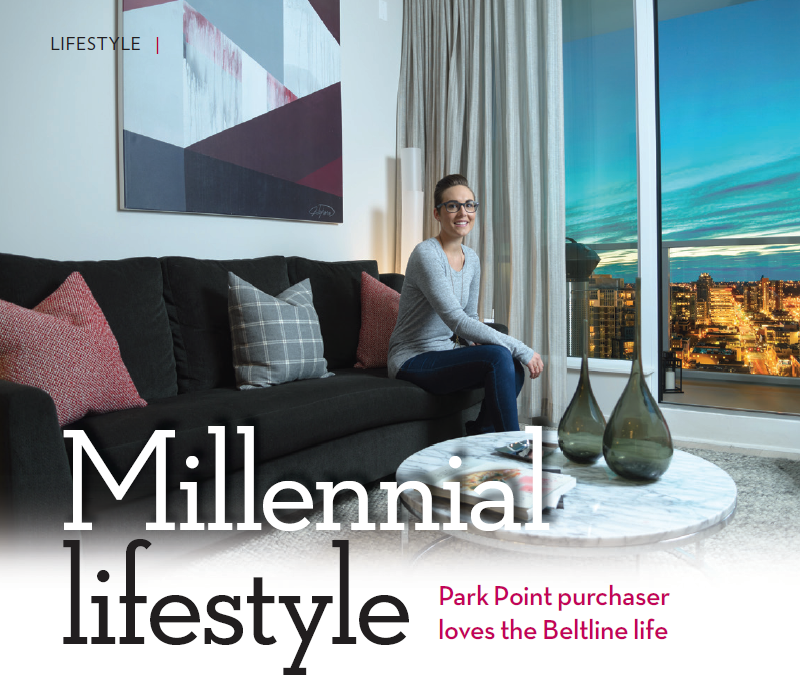 Whitney is a homeowner, landlord and renter, but all of that will soon change with a purchase that will bring her from being a player in every sector of the real-estate market to simply living in the perfect condo in a neighbourhood she has fallen in love with.

The 28-year-old got her start as a homeowner with a condo in Royal Oak. From there she built her first house, in Okotoks, to be close to her parents and siblings. That was almost three years ago. In April, Whitney decided she wanted to move back to Calgary, but wanted a totally different experience. She rented out her house to her parents, while they renovated their own home and became a renter herself in a new Beltline building.

“I’ve never rented before,” she says. “I was nervous.” It turned out that Whitney fell in love with her Beltline neighbourhood and decided to make it permanent, and made the decision to purchase a suite in Park Point. Park Point is a two-tower, 289-unit apartment condo development by Qualex-Landmark™ that is going up only a few blocks away from where she currently lives.

A stop at their show room on 11th Avenue S.W. and 3rd Street, and she knew she found her perfect fit. She says she looked around in other downtown neighbourhoods, but decided her heart had already found a home. “I love the area,” she says. “I have access to so many things. 17th Avenue is close. I can walk to 17th and Stephen Avenue.”

Most of Whitney’s friends live downtown and she meets up with them at local spots, like the Ship and Anchor and Local, she says. The Beltline also offers one of her favourite things in life, in abundance. “I also love coffee more than anything,” she says. “I go to the Purple Perk in Mission and Waves on 17th. I also try to try a new coffee shop every couple of weeks.” It hasn’t taken long to figure out the Beltline is the place for Whitney.

“It has been the best move of my life,” shey says. “As a young professional, and I’m single, its just conducive to my life. ” Another reason why Park Point called to her is its proximity to Central Memorial Park. “The atmosphere in the park is great,” she says. “It’s always busy and there are lots of benches and the fountains give a nice ambiance. There are grassy parts so you can lie out and read a book.”

Her ninth-floor, west-facing one-bedroom, one bathroom apartment will overlook the park. She can’t wait to sit on the balcony, take in the view and enjoy the setting sun. “I love to get the afternoon sun,” she says. The approximately 500 square foot unit will fit her perfectly, she says, even coming from a 1,700 square foot home with two bedrooms and three bedrooms in Okotoks.

“I didn’t use 90 per cent of my house in Okotoks,” she says. “I didn’t fill up every room. Material things don’t matter as much to me.” Moving into her current rental, which is a similar size to her Park Point unit, was no problem so she will be able to bring all of her current furnishings with her. A sectional sofa for her living room will even make the transition, she says and her glass and metal kitchen table is made for her new space. 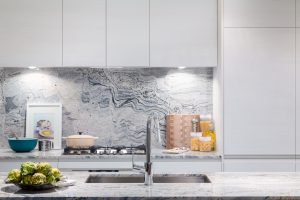 Whitney says the finishing and colour palettes offered at Park Point fit with her current aesthetic, making it easy to incorporate her modern style into her new condo. “They had three different colour palettes and I chose ‘dawn’, which is based on white,” she said. “The granite is light, the cupboards are white and the accents are grey.” It was the clean look she was going for, she says.
The wide-plank laminate flooring adds to the light and contemporary feel, says Whitney. The large bathroom, with a full-size stand-up shower is also a great feature, she says. In the bedroom, there is plenty of closet space, she adds. “I need space for my clothes,” she laughs. “Its important.” Another selling point was in the insuite laundry and the underground parking. “There is parking, which is key,” Whitney says. “I needed somewhere to park my car.”

Although the Beltline is a totally walk-able neighbourhood, she works near Chinook Mall, a quick drive from her neighbourhood, she explains. Park Point also ahs underground visitor parking stalls and bike storage. Residents will have an on-site vehicle, bike and dog wash at their disposal as well. Living only a few blocks from where Park Point is making its way skyward is exciting, Whitney says. “I can watch it go up,” she says. Possession for her unit, which she purchased in April for $367,000, is in the spring of 2018.

Photos in article by: Don Molyneaux