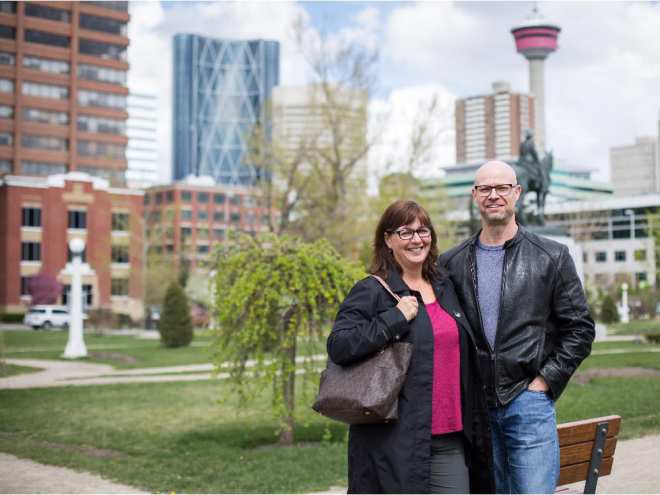 Debbie and Cameron Cousins’ new condo at Park Point will be across the street from Central Memorial Park.
Photo by: Adrian Shellard

Sometimes one just reaches the point where the big house, the yard work and the car-centric lifestyle don’t make the heart flutter anymore.

For Debbie and Cameron Cousins, both in their 40s, that moment arrived sooner, rather than later.
They are on the cusp of empty-nesterdom. Their 22-year-old daughter is poised to fly the coop in the next year or two and, with that in mind, they were inspired to make the shift from their single-family home in the suburbs to condo living in the city’s core.

And they found their perfect abode in the new urban project Park Point, a collection of 287 homes layered throughout a pair of glass-sheathed towers overlooking Central Memorial Park, one of the most historical and beautiful locations in the downtown core.

“We’ve been thinking about our next move for quite a while, almost three years,” says Debbie, who works in the finance group for a downtown-based oil and gas company. Cameron, an engineer and land man, also works downtown, and the two commute together from their home in Hidden Valley in Calgary’s far northwest.

“But I usually end up busing home, while Cameron works late,” says Debbie.

The long commute, coupled with the fact that once the couple arrives home, they rarely venture back downtown to the Beltline or 17th Avenue to check out new restaurants or enjoy an evening out, drew them closer in to the city’s centre to search for their next home.

And Park Point had it all: great location, luxurious homes and plentiful amenities from a guest suite for the couple’s out of town family to a Pilates/yoga studio and a zen-like landscaped terrace for barbecues and lounging.

With its bold, contemporary architecture, Park Point’s twin towers feature a staggered profile with one tower stretching 34 storeys skyward and the other 27. The silhouette will be dramatic against the city’s skyline. The couple purchased a two-bedroom and den condo-style home on the 32nd floor with sweeping views of the mountains and the park. It offers almost 1,100 square feet of living space on one level.

Finishes are exceptional. The home exudes a cosmopolitan vibe with a spectacular kitchen and bright open spaces enhanced with floor-to-ceiling window walls.

Cameron admits that he had trepidations about the change in lifestyle, but after spending Christmas holidays this year with family who live in downtown Ottawa, he was convinced. “Everything was right there. We walked everywhere,” says Cameron, adding that Park Point offers a very similar type of lifestyle.

The project recently earned a walk score rating of 98 per cent, due to its location within the funky pedestrian and bicycle friendly area at 12th Avenue and 2nd Street S.W. Location was one of the prime differentiating factors that attracted Park Point’s Vancouver-based developer, Qualex-Landmark, to the area.

“We specifically chose Calgary’s Beltline community because it is a very established neighbourhood with every amenity and service imaginable within a short walk,” says Mohammed Esfahani, president of Qualex-Landmark. Definitely, the lifestyle appealed to Debbie and Cameron, who were sold on the area.

“We’ll be able to walk for groceries at the Co-op or Community Natural Foods and we both can walk to work. It’s all very exciting,” says Debbie, adding that the location next to the park with its Victoria-era inspired gardens also works for Indiana, the couple’s eight-year-old miniature schnauzer.

“He’s pretty excited about the move, too,” says Debbie with a laugh. The couple plans to move in upon completion of the project in 2018. “We are going to have to get rid of some stuff for sure, but that gives us lots of time,” says Cameron.

Project: Park Point is a collection of 287 homes consisting of one- and two-bedroom designs with optional den/flex space. At street level, Park Point will feature a limited number of two-storey townhomes and a vibrant retail component.Builder-Developer: Qualex-Landmark.
Show Suites: The Discovery Centre showcases two condominium styles — Plan 01, a 560-square-foot, one-bedroom home with a 108-square-foot terrace; and Plan 07C, a 1,024-square-foot, two-bedroom plus den plan with an L-shaped 88-square-foot terrace.Price: Homes start from $250,000 with no parking. With parking, homes start in the low $300,000s.
Location: The Discovery Centre is at 301 11th Ave. S.W. The project is at 2nd Street and 12th Avenue S.W.
Hours: Mondays through Thursdays from noon to 5 p.m., and Saturdays and Sundays from noon to 5 p.m.