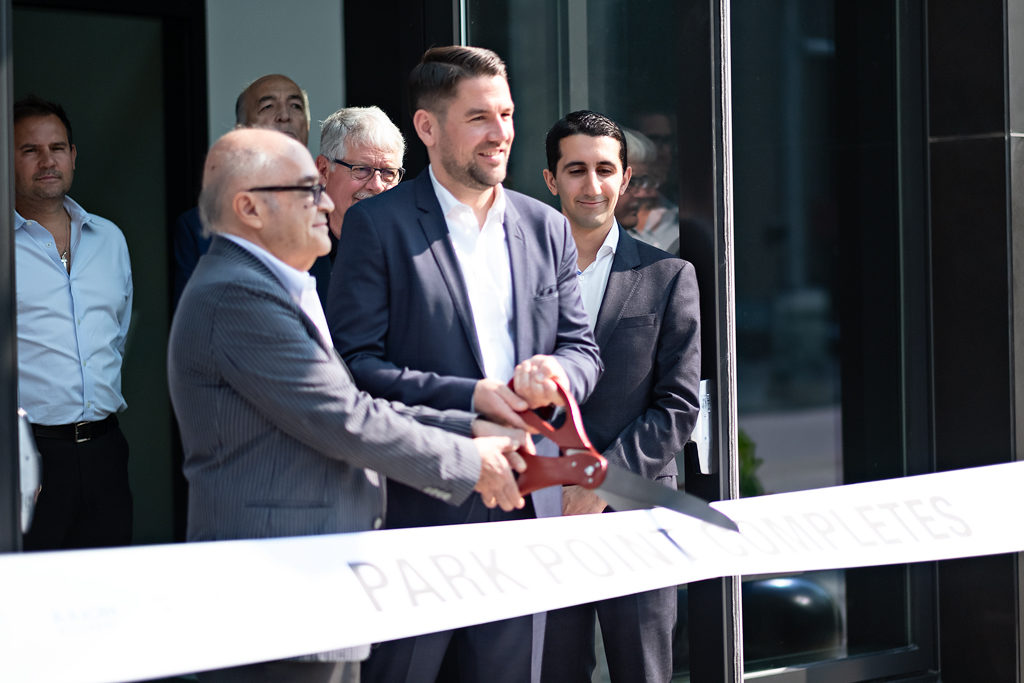 Qualex-Landmark never doubted Calgary’s resiliency, as it launched its $110 million Park Point project in 2015 at the beginning of the city’s downturn.

“Whether booming or bust, Calgary is a great place to live,” said Mohammed Esfahani, a founder and president of the company, at the 34-storey tower’s official opening.

As residents have begun their move into their luxury Beltline homes, he described Park Point as the company’s flagship project: “It is our finest work inside and out” in a “very special spot” across from historic Central Memorial Park.

Or as vice-president of planning and marketing Parham Mahboubi put it: “35 months in the making, but worth the wait.”
More than 85 per cent of the 289 Park Point homes have been purchased and a second tower will go ahead once the first building is sold out. Remaining suites range from one bedroom (560 square feet) to two bedroom and den (up to 1056 square feet), to one sub-penthouse of 1,340 square feet (with expansive wrap-around outside deck space). Prices range from the low $300,000s to $1,078,000 for the sub-penthouse.

The project was envisioned, said architect Martin Bruckner of IBI Group, as a landmark, iconic structure enhancing Calgary’s skyline. Its strong black and white vertical façade resembles an exclamation point with the podium at its base as the dot and stepped, wrap around decks and patios offering park, city, and mountain views.

The 289-unit building (including eight street level live/work townhomes), at the corner of 2nd Street and 12th Avenue S.W., also features a large gym and yoga/Pilates studio overlooking the park, steam and sauna rooms, a Zen terrace with water feature and seating, and an entertainment room with kitchen and outside patio/barbecue area.

Qualex-Landmark has worked in British Columbia and Alberta for 25 years and has invested heavily in Calgary’s Beltline, with almost $500 million in real estate value (and 1,300 homes) in the past 12 years.

Mahboubi says the company is committed to the area because it is an established, amenity-rich neighbourhood with historic roots and culture, close to downtown. Park Point will eventually be a one-block walk to a subway stop on the new Green LRT Line.
He says while buyers in Park Point have predominantly been somewhere between 30 and 50 years of age, they are spread between first-time buyers, to downsizers, with most being end-users, rather than investors.

One of the attractions of Park Point is its closeness to the two-hectare Central Memorial Park, the city’s oldest park, redeveloped in 2009. Company president Esfahani described access to park living as important — and as increasingly unattainable — as waterfront living.
Area city Coun. Evan Woolley grew up in the Beltline and remembers the park, in the 1980s, as being a place that has evolved, along with the neighbourhood, into an amazing urban playground.

“This is about economic development, thousands of jobs, and private sector investment,” he said of the Park Point project.
Even with expectations that oil and gas will not return to past boom times levels, Woolley said it’s no accident Calgary, with one of the youngest and most educated populations anywhere, is ranked fifth on The Economist magazine’s list of world’s most liveable cities.

View this article online by Barb Livingstone for The Calgary Herald.

For final homes opportunities, contact Leah Callow, Sales Manager for details.
Want to learn more about Park Point ? Let us know!
Stay up to date with Qualex and join our mailing list here!