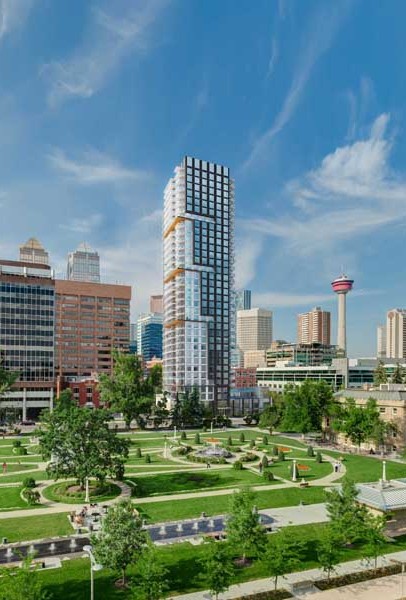 The mixed-use residential condo, which will ultimately include two towers, is being designed by global architectural firm IBI Group, and is aiming to bring a unique architectural vision and a host of opulent amenities.

Tony Wai, project designer with IBI Group, said the park-side location with 287 residences in its first phase will be unique compared to other downtown residential structures.

“Park Point’s towers are designed as one complete architectural expression, meaning its location overlooking Central Memorial Park offers viewers the opportunity to admire Calgary’s most modern urban residence as a whole, without other buildings obstructing the view,” he said.

“This isn’t possible in denser parts of downtown.”
The double-height lobby and distinctive facade will be buoyed by the building, which will boast a stepped effect and unmatched views of the city’s skyline.

“Park Point’s strikingly unique architectural facade will be the landmark of the neighbourhood as seen from the park but from downtown too, as it will be the tallest building in the immediate vicinity,” said Qualex-Landmark president Mohammed Esfahani.
Overlooking Central Memorial Park, one of Canada’s oldest urban green spaces designed in 1889, Park Point’s third floor will feature an outdoor yoga/pilates sundeck, a zen terrace, and an open air lounge with a firepit, barbecues and seating.

Inside, residents will have access to a steam room with sauna and change room facilities, a private owner’s lounge and a guest suite available in each tower for out-of-town visitors.

In addition to one- and two-bedroom apartments with optional den/flex space, Park Point will offer live-work townhomes at street level.

The first release of Park Point homes is expected in early 2015 with construction slated late next year.
Phase 1 is anticipated to be completed sometime in 2017.