Reach for the sky

The race is on for Calgary’s tallest residential condos

As Calgary’s skyline continues to soar upward, Calgarians, it seems, are heartily embracing the “high life.” High-rise condos are seeing unprecedented interest from buyers, as evidenced by launch line-ups and sold-out statuses for a number of new builds. As the downtown core becomes more desirable, populated with trendy restaurants and watering holes, walkable streets, and quick access to urban parks and pathways, elegant shining spires appear beneath towering cranes at a steady pace. Here is a list of some of the newest developments that soar past the 3o-storey ceiling in Calgary’s downtown. Most are either in development or completed in the last few years. 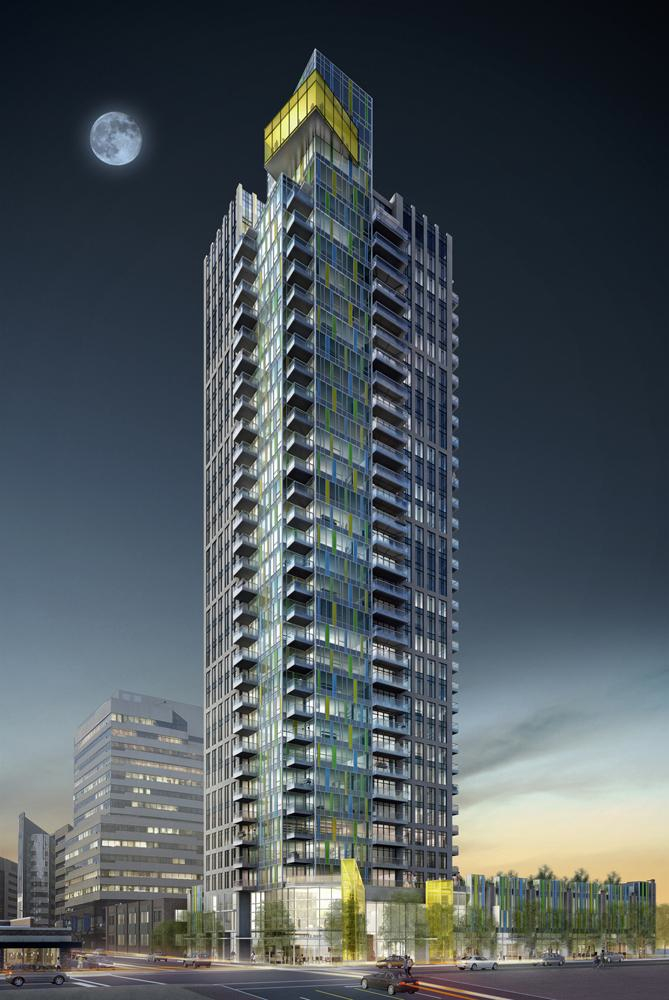 Tri-coloured accents and modern lines mark the 35-storey Mark on 10th by Qualex-Landmark, which features luxury rooftop gardens for sunbathing, barbecuing and hot tubbing near the wet bar, wi-fi media centre, fitness centre and billiards table. Currently underway on 9th Street and 10th Avenue S.W., its 274 units will be finished in 2015. The building will also include a 3rd-floor, 17,000-square-foot common garden. The tower – despite still being under construction – is sold out.

The tapering twist of the Telus Sky tower will thrust 59 storeys into the skyline immediately west of the Bow Building on 7th Avenue, and is set to break ground this summer. The $350 million mixed-use tower will have 760,000 square-feet in total, which will be divided between office space, retail space, and 29 floors containing 341 residential units. Features of the building will include a public art gallery and energy-efficient measures including rainwater recycling. SIated for completion in late 2017. 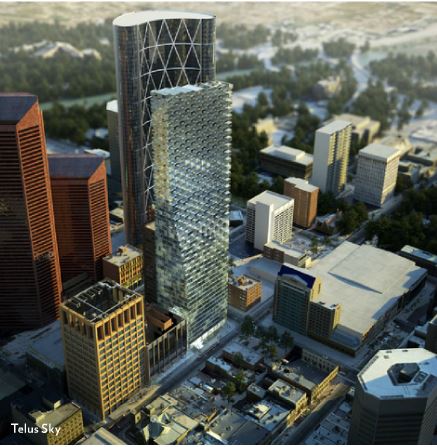 The Guardian takes the prize for the tallest purely residential tower in the city. Still under construction, the twin 44-storey towers by Hon Towers are rising up in Victoria Park, on 12th Avenue and Olympic Way. Glass balconies edge suites size from the sensible (441 square-feet) to the sublime (3,300 square-feet). Amenity spaces will include a fitness room, yoga studio, workshop, social lounge and terrace garden between the towers. Guardian North should be ready by spring 2015.

Next to The Guardian (in proximity, as in height) is Arriva. Completed in 2007, Arriva launched an air of sophistication in the transforming Victoria Park neighbourhood. With 36 storeys split between several floors of commercial space at its base and 164 condo units behind Arriva’s iconic aqua-tinted windows, Iiving spaces boast Italian kitchens and curtain windows looking out over the city. Stampede Park is minutes away on foot.

The construction of the two 36-storey Nuera towers by Cove Properties helped ring in a new architectural era in the beltline area. The area close to Victoria Park and Stampede Park is undergoing perpetual renewal as crumbling facades give way to upwardly mobile buildings, restaurants, shopping and entertainment. Sleek and stunning tapered tops with shining glass give the buildings a unique appearance. With 231 “skyhomes” in each tower, suite sizes range from 651 to a roomy 1,400 square-feet. Both developments are sold out. 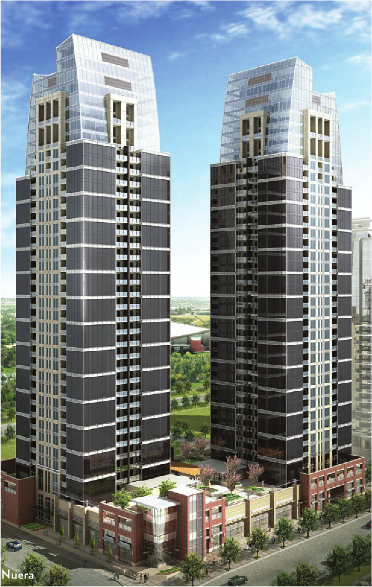 Tri-coloured accents and modern lines mark the 35-storey Mark on 10th by Qualex-Landmark, which features luxury rooftop gardens for sunbathing, barbecuing and hot tubbing near the wet bar, wi-fi media centre, fitness centre and billiards table. Currently underway on 9th Street and 10th Avenue S.W., its 274 units will be finished in 2015. The building will also include a 3rd-floor, 17,000-square-foot common garden. The tower – despite still being under construction – is sold out. 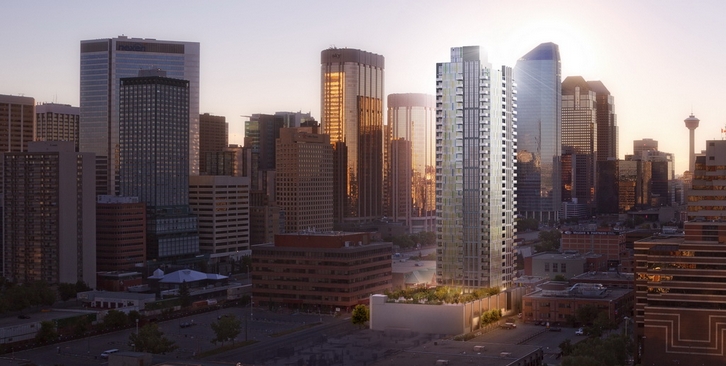 Vogue is more than just style, it’s a lifestyle; and this new, elegant residential tower rising in downtown’s much-coveted west side promises to bring a new brand of sophistication to Calgary’s urban condo living scene. This 34-storey tower from the La Caille Group won’t be just another glass tower transplanted from Toronto or Vancouver, it will have a character and style that is uniquely Calgary, the developers say. 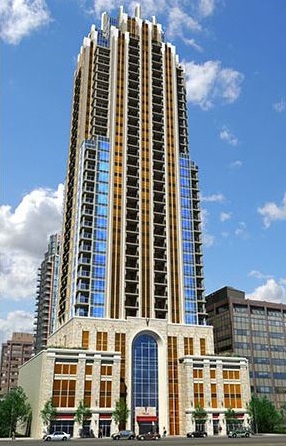 The Orchard on Twelfth and 6th and Tenth

Both high-rises are from Toronto-based Lamb Developments and they both crack the ceiling at 31 storeys high. Both exemplify the kind of modern glass-and-steel aesthetics found in financial capitals of the world. Both are small plate, slender towers that allow suites to more glass than hallways. 6th and Tenth is a single high-rise in the Beltline which is already 8o per cent sold, and The Orchard will be a twin tower development along Victoria Park that will have an actual apple orchard between them, and sales are starting this fall. 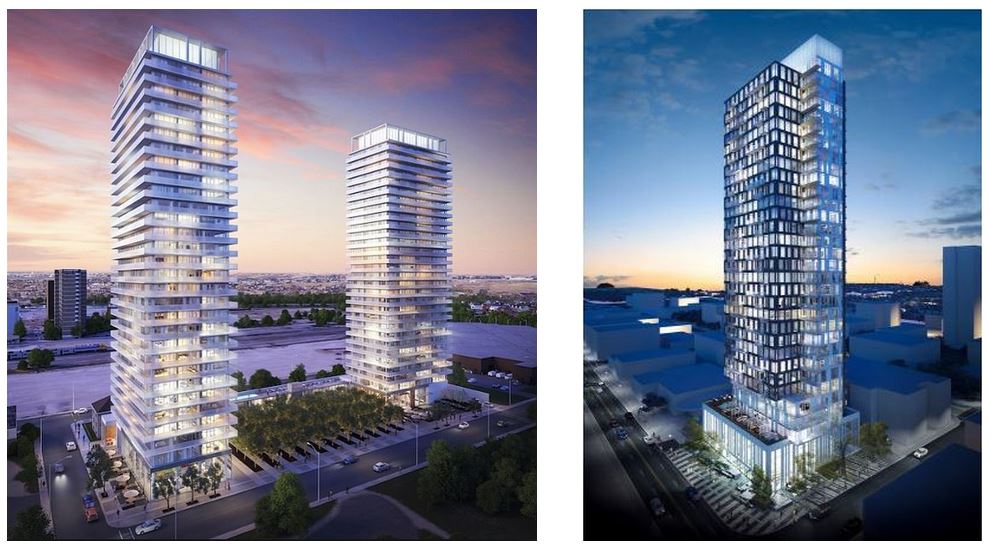