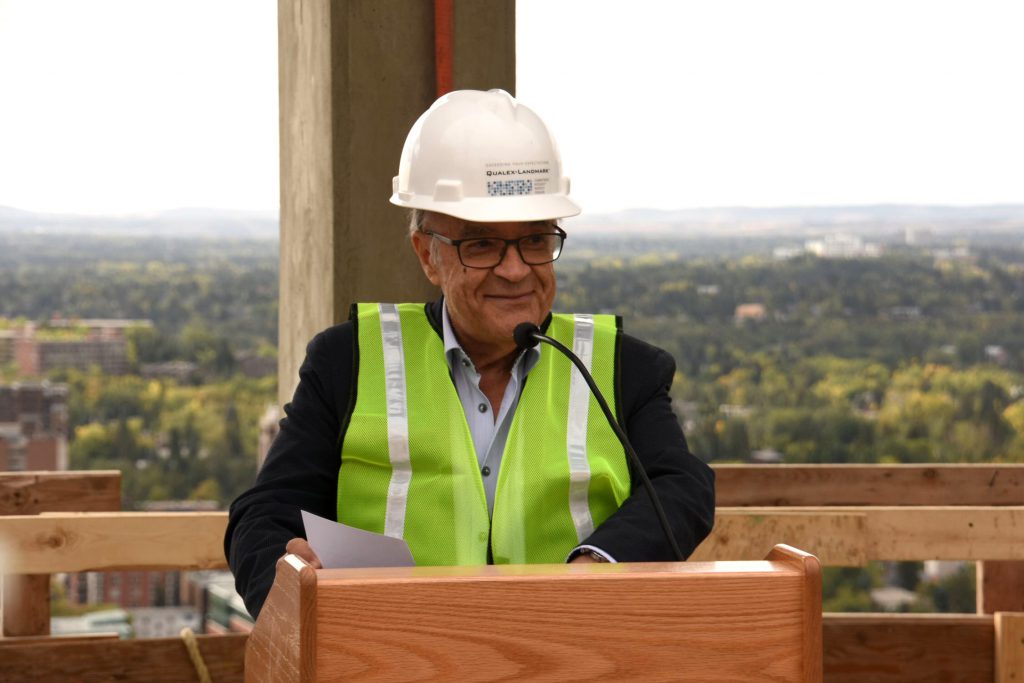 Mohammed Esfahani, president of Qualex-Landmark, speaks about the project, image by Kevin Cappis

Almost two years ago today, Qualex-Landmark broke ground on Park Point, a 34-storey, 289-unit residential tower in Calgary’s Beltline. The tower, designed by IBI Group and constructed by Axiom Builders is their sixth Calgary project, and has officially topped out. SkyriseCalgary was on hand to help officially mark the occasion Tuesday morning high above the streets of the city.

The ceremony was led by representatives from the developer, builder and architect, who gathered on the rooftop to celebrate the milestone and speak about the project’s resounding success.
Mohammed Esfahani, co-founder and president of Qualex-Landmark, spoke about his company’s continued success in Calgary, and quipped that some people have even referred to the Vancouver-based developer as the ‘King of the Beltline’. It’s a title that’s hard to deny as the company wraps up it’s sixth Beltline project, with more highrise residential communities completed than any other developer in the neighbourhood.

Tony Wai, chief design architect from IBI Group, spoke about Qualex-Landmark’s desire to execute something that would differ from other buildings in Calgary’s skyline. They found that many of Calgary’s buildings followed a similar massing strategy, rising straight up, and narrowing at the top. IBI’s Park Point design does exactly the opposite, gradually widening to a prominent crown.

The ceremony was officially marked with the tower’s final concrete pour. A small square area of the rooftop was filled with concrete, and the concrete was smoothed out by various attendees. The crane took away the empty bucket, and the tower’s topping out was official.

Now that the $110 million condominium is topped out, most of the work will be focused on the inside, with occupancy slated for the summer of 2018. Residents moving into the tower can look forward to some beautiful views and great park access, as Central Memorial Park is right across the street from the development. That proximity is, as you may have guessed, the reason for the name Park Point.
Even though Park Point has topped out, we will continue to follow the project right up to and even after move-ins. What’s next for Qualex-Landmark once Park Point has been fully completed? Parham Mahboubi, vice president of sales and marketing, suggested that the planned second tower just north on the property is most likely the next project on the developer’s radar.