Opinion: It’s time to move the housing conversation from the gym, bar or dinner table to the public forum

When we consider milestone years in Vancouver’s development, we might point to 1887, when the first CPR locomotive pulled into town, or Expo 86, which brought with it the SkyTrain and opened Vancouver to the world. 2022 is quietly looking to be another year that a train will shape our city’s fate for the next several decades. This spring we will see the long-awaited Broadway Plan move forward for approval, a set of policies that will guide the growth of nearly eight per cent of the city’s land mass from Vine to Clark. Approximately 11 per cent of survey respondents during the last round of public consultation were under the age of 29, although this plan will disproportionately impact these respondents as they live with its 30-year framework. 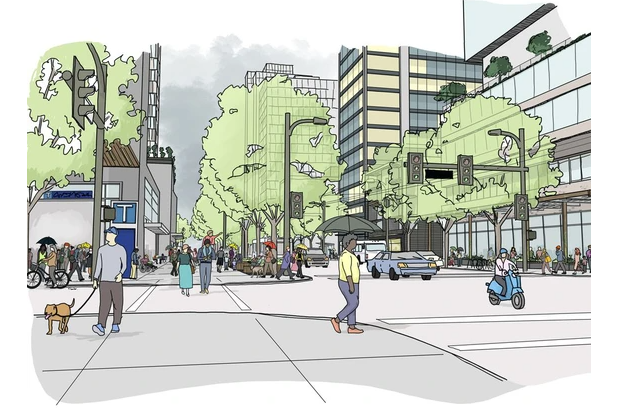 Artist’s conception of the area around a subway station in the new Broadway plan. City of Vancouver graphic. For John Mackie [PNG Merlin Archive] PNG

This emerging plan will test our businesses, residents, municipal staff and political leaders’ appetite for Vancouver’s next generation of neighbourhoods as we continue to evolve from a city planned by a railway company into a thriving city of communities that can accommodate their own mix of businesses and different heights and shapes of housing.

An expert panel of housing professionals appointed by the ministers of finance of B.C. and Canada recently called for a city planning framework that proactively encourages housing. With key policies that will shape our housing future set to go to council, it’s worth asking if they are setting the stage to encourage the housing we desperately need?

For those of us with young families or aging parents who are constantly sweating their next move as their space and amenity needs change, the Broadway Plan offers a sense of optimism for the future. While no plan is perfect, this one looks to add a significant amount of housing — and not just in its noisiest locations near busy stations or roads — to a city that is still largely zoned for single-family homes. In particular, there is a focus on rental housing, an important feature for a city that has a majority of renters.

As someone who works in the planning and development of housing and has also seen his fair share of challenged housing situations for peers and colleagues, a wish list item would be to make it easier to build rental. Rental projects are already facing headwinds with rising construction and borrowing costs. It would seem that with the tightest rental market in the country, this is what we would want right now. With the right policy, the next version of the once-affordable and easily built Vancouver Special could be a multi-unit rental building.

If the very recent and very convoluted public hearing process for a new policy set-out to make it easier to build mixed-use and rental along arterial roads taught us anything about ourselves, it’s that not all of us are ready for the changes that the Broadway Plan is asking for.

A philosophical issue with public consultation and the lengthy public hearings that are surely ahead of this plan is we don’t get to hear from the generations of people that will be most impacted by today’s decisions. Our five-month-old daughter and her peers will be living with the moves we make this year, although they will, of course, not have a say. Nor will the many thousands of new British Columbians set to arrive this year and next.

Regardless of your opinion on the plan, it has never been easier to make your voice heard through online hearings and surveys. In fact, you can comment on the latest draft of the Broadway Plan until March 21 online. With the Broadway subway already under construction, it’s crucial that our civic leaders hear from as broad a spectrum of us as possible.

The first train that rolled into Vancouver in 1887 brought with it transformational change to our city. Let’s hope the next train we build can do the same.

Henry McQueen is a Vancouverite educated in urban planning. He works and volunteers in the development of rental, condominium, below-market and non-profit communities across Metro Vancouver.

View article in The Province