The Beauty of the Beltline 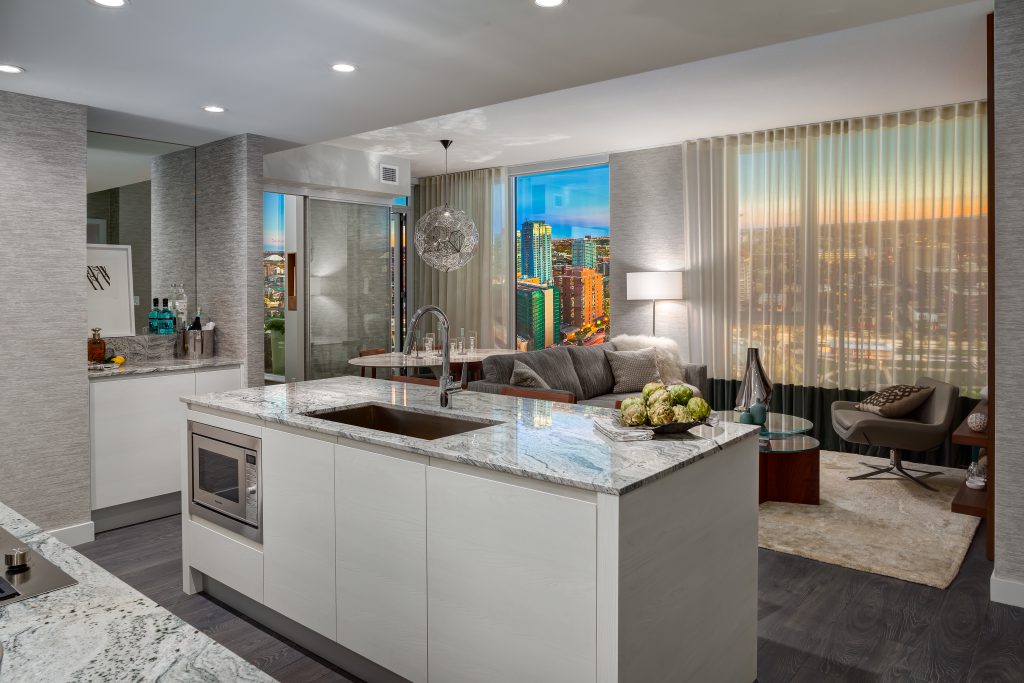 Calgary’s Beltline district has been one of the hottest selling properties in the city. With its treasure trove of shopping, dining and entertainment amenities, proximity to the downtown core and Central Memorial Park at its epicentre, it’s a no-brainer why single professionals, couples, and downsizers would want to live here.

Yet, with a bevy of Beltline condos to choose from, the clear winner has been Park Point. The 34-storey, 289-suite tower from Qualex-Landmark™ can already be seen rising across the street from the beloved Central Memorial Park, and construction of the first of two buildings is now about halfway complete. Sales have also kept pace with the rapid development, despite the challenging Calgary economy.
“The Park Point residential tower is now 70 per cent sold,” says Parham Mahboubi, vice-president, planning and marketing, Qualex-Landmark™. “While we only have one sub-penthouse and one live-work townhome remaining in the project, we still have an outstanding selection of one- and two-bedrooms suites and sizes available to suit the needs of homebuyers.”

But the reason for its outstanding success can’t be all attributed to its location, as Park Point has the complete lifestyle package that fit the cosmopolitan allure of downtown living. Besides, this isn’t the first Beltline development from Qualex-Landmark™. Their previous offerings — Mark on 10th, Luna, Nova, Calla, and Stella —  all contributed to the newfound growth of this historic inner-city community. In fact, all their condos have gained a well-deserved reputation for meticulously-designed floor plans and amenities tailored to a variety of lifestyles and budgets. Park Point, though, literally tops them all.
“Park Point’s unique proposition in the marketplace is its park-side location on Central Memorial Park. This public amenity offers Park Point homeowners a beautifully manicured urban park right in their back yard. The best part is they don’t have to mow this lawn or maintain it, ever,” Mahboubi says.
“And when combined with the upscale interiors, project amenities, protected views and backed by a reputable and experienced developer, there really is no comparison to Park Point anywhere in the inner city.”

The remaining homes at Park Point offer stylish, meticulously finished one- and two- bedroom suites from roughly 502 to over 1,340 square-feet that start from the $320,000s.  European in style and deeply practical, Park Point’s award winning interior is carefully designed by Scott Trepp, president of Trepp Design Inc., and has received tremendous feedback on the outstanding finishes, which is one of the strongest selling points of these homes. These include, for example, genuine granite slab countertops and backsplash, Italian Armony Cucine cabinetry, high-end appliance package, finishings and accessories. In many ways, the suites themselves are art pieces.

“The functionality and intelligent design part of the homes is about making a smaller space work as efficiently as a larger space,” says Trepp. “This comes down to design details such as placement of drawers in kitchens, to the overall placement of appliances that really work cohesively.”
Stylish interiors and an unbeatable park-side location and terrific, unobstructed views of the surrounding cityscape have combined for Park Point’s tremendous success. And Mahboubi says they have seen an “exciting uptick” in sales since January 2017.

“Between the significant advancement in construction and the stabilization of the market, we’ve seen 20 home sales since January. To put it into perspective, that’s equivalent to selling an entire residential city block in the suburbs,” he says.

“The pace of sales is certainly very positive news for our homebuyers and a clear signal that the real estate condo market is turning around.”
He says there’s been a noticeable change to who’s been buying as well. “Compared to our previous five residential towers in Calgary’s Beltline community, Park Point has certainly seen a shift from investors to more end-users. This trend may be due to both market conditions and Park Point’s unique location,” he says.

“While park-front property makes for an excellent investment, end-users are especially drawn to the upscale interiors, outstanding amenities and protected views over the park. End-users and investors alike realize the rare opportunity to buy park-side.”
Park Point also boasts relatively larger suites than some of the developer’s most recent Beltline condos, which may explain the relatively equal pace of sales for its one- and two-bedroom suites. What Mahboubi did find surprising is the “virtual sell-out” of their street-level live-work townhomes, with only one of the eight suites remaining.

But their 502-square-foot one-bedroom apartment-style condos are also moving well. “They come with no parking stall, but given Park Point’s central location and reduced dependence on cars. This suite type has been very popular based on price point.” Mahboubi says buying at Park Point now at pre-construction prices may prove to be beneficial.

“Pre-construction sales usually appeal to homebuyers who have less urgency to purchase a home. The construction period provides for an appropriate transition plan. For example, it may appeal to a downsizer who is planning to sell their single-family home, or a young professional planning to live closer to work, but needs a few years to build capital,” he says.

“Purchasers view construction timelines as a positive, where they purchase a property with little upfront investment. Following construction completion, the value of the investment has usually increased notably, so they reap the benefits of a lift in the value of their investment whether they plan to sell or to move in.”
Regardless, homebuyers that are seeking a modern upscale home with a warranty and without compromise will look to pre-construction sales as a way to acquire an excellent new product, at pre-construction pricing with greater choice. “For most homebuyers, it is worth the wait, especially when it is a rare opportunity such as a park fronting condo as in the case of Park Point,” he adds.
Possessions at Park Point begin in 2018.