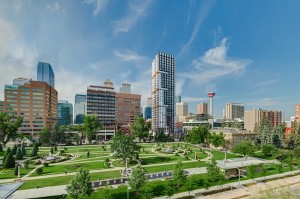 As the largest segment of the population in North America, baby boomers have undoubtedly shaped our world more than any other age group. And their impact on housing is profound.
As this ge neration, born between 1946 and 1964, becomes increasingly gray, the real (‘7 estate industry is responding to their needs for housing.

Many develope rs in Calgary are turning their attention to high·density high·rises in the Beltline and other centrally located neighbourhoods to reOeet boomers’ demand for stylish. worry-free living. said Parham Mahboubi, vicepresident of planning and marketing at Qualex-Landmark a Vancouver-based development firm which is the force behind Park Point in the Beltline along 12th Avenue S.w.

“‘Over the last decade, we have observed a gradual increase in condo buyers within this demographic driven by their desire for more care-free centralized living options in close proximity and walking distance to amenities such as restaurants, coffee shops and essential services,” he said, noting many of Park Point’s buyers are boomers who are downsizing from larger suburban homes.

“They want to be able to walk everywhere on a flat grade – no slopes or stairs – and without reliance on a vehicle; however, they want a parking stall for their vehicle for when driving is a necessity.”

While certain housing segments such as apartment-style condos will benefit from downsizing boomers, the real estate market as a whole could be at risk of over-supply as the homeowner demographic shifts in the coming years, notes Hillard MacBeth, director of wealth management with the MacBeth Group Richardson GMP in Edmonton.

MacBeth, who penned the book when the Bubble Bursts: Surviving the Canadian Real Estate Crash, expects boomers will release more housing onto the market than they absorb as they age because some will be selling and moving into non-residential arrangements like nursing homes, or simply passing away.

In the short-term, MacBeth says the current economic conditions will have a much more immediate impact on the housing market than aging boomers. In part, this is because of the high levels of debt among younger earners, many of whom are being laid off or are facing uncertain futures as a result of the faltering energy-based economy.

“Young people who lose jobs will be sellers of real estate, and boomers will choose to stay put as they won’t be able to sell or they won’t like the price offered for their houses if they try to sell,” he said. “Due to lack of entry-level jobs, there will be a dearth of first-time buyers, and move up buyers – key segments of demand that drive housing markets.”
while Real Estate Investment Network senior analyst Don Campbell has seen some boomers relocate to inner-city condos, he does not agree that boomers are fleeing the suburban homes en masse.
“Despite all of the forecasts and conjecture, boomers are not selling their larger, single-family homes and rushing to downsize to condos as one big wave,” he said. “Sure, there is a small percentage taking this route, but what we are discovering is that they do not want to leave the neighbourhoods where they have all of their friends, favorite coffee shops, backyard garden and other favor ite localized conveniences.”

Indeed, even Mahboubi admits boomers are not solely responsible for driving condo demand in the inner city. He said the majority of buyers at Park Point are professionals under age SO. Yet he also argues boomers and younger generations are becoming more aligned in the housing they’re seeking.

“We have found that the home types at Park Point that have larger square footage between 850 to 1,650 square feet have a much greater appeal to this older demographic downsizing from much larger homes in the suburbs,” said Mahboubi.
And while the fortunes of the economy undoubtedly have an effect on the market, Mahboubi said many boomers have been through trough of Calgary’s boom and bust economy before.

“Their experience teaches them that the economy goes through swings and in Calgary has always rebounded,” he says. “They will also thoroughly investigate all options and res idential condo projects on the market and then make practical decisions that take advantage of opportunities that make practical and economic sense.”