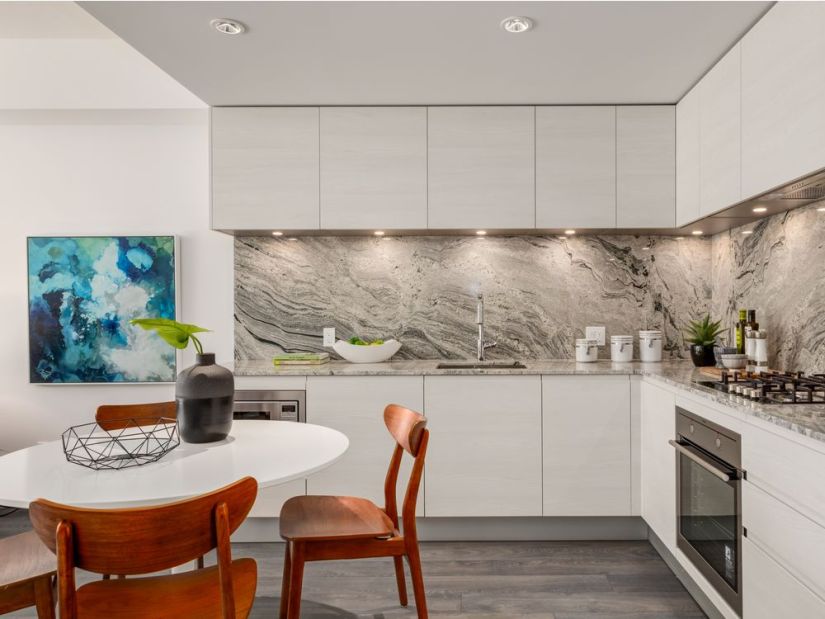 It’s down to the home stretch for Qualex-Landmark’s $110 million skyscraper in Calgary’s Beltline district. After breaking ground in October 2015, Park Point is about 90 per cent complete and expected to offer first occupancies this August.

“While modelling and display suites are a huge part of the sales and marketing process and offer incredible tools to help people visualize their future home, once a project is completed nothing compares to the real thing,” says Parham Mahboubi, vice-president, planning and marketing for Qualex-Landmark. “It’s taking the experience to an entirely new level.”

“When a project is completed, the home starts to live and breathe unlike renderings, which are more static,” he adds.

Lobby and amenity areas are more challenging to showcase in pure digital form, Mahboubi says — and for the exterior architecture — “while a miniature scale model or rendering is extremely helpful, it falls short of providing anyone with that awe-inspiring feeling from a completed skyscraper.”

As it nears completion, here are five things about the 34-storey tower — Qualex-Landmark’s sixth development in Calgary:

In an upscale highrise, sightlines are a selling feature. Among the assortment of views at Park Point are Central Memorial Park, and others where the Calgary Tower feels within reach.

“For years, we have been able to provide homebuyers with the view outlook from every elevation in a building using blimp aerial photography or more recently drone technology,” says Mahboubi. “The one limitation is that these do not provide the homebuyer with the exact view span until the building is completed.

“For example, your view from the living room or bedroom will be different from the view on the balcony or patio,” he adds. “The balcony side screens, walls or overhead balconies from other suites will also impact view outlook.

“Technology still has a way to go to recreate the true and accurate view outlook experience.”

Kitchens in the spotlight

Many of the condos now have the Armony Cucine full-height cabinets, integrated appliances, and striking granite counters and backsplashes already in place.

“We are after arousing an emotional response in our homebuyers stemming from a thoughtful design package that encompasses the entire kitchen space,” says Mohammed Esfahani, president, Qualex-Landmark.

One of the standout elements in the kitchens at Park Point is a back-lit shelving unit. A blend of functionality and visual interest.

“The tall full-height open storage component LED lit panel in behind, becomes the jewelry of the kitchen, and because it’s back-lit, you get this amazing display and capture,” says Scott Trepp, president, Trepp Design Inc.

In three instances, people who bought at Park Point didn’t just get one condo, they selected two. Flexibility available with certain floor plans allowed them the ability to have the developer make them into one home.

“We consciously planned to have a slightly higher proportion of one-bedroom suites at Park Point,” Mahboubi says. “However, we also wanted to provide home buyers a greater diversity of housing choice. We considered the combined suites option as a way to offer homebuyers as much latitude in choosing a home that meets their needs.”

This was Qualex-Landmark’s first time implementing combined suites in a Calgary development.

“This approach allowed homebuyers to select from two combinable suites that are side by side to create a larger suite of their choice, and it was certainly well received,” he adds.

The combined suites route resulted in some early design challenges.

“This involved overcoming plumbing and structural hurdles,” Mahboubi says. “For example, plumbing in kitchen and bathrooms still need to be vertically aligned with the suites above and below the combined suite. The suite layout also needed to work around structural walls and columns.

“With a great design team, we were able to produce a larger, beautiful, and open-concept suite.”

Connecting with the park

Whether it’s the backdrop for a sunny afternoon with a good book or views from amenity spaces, or the condos, themselves — Central Memorial Park plays an important role at Park Point. Standing on the now constructed Pilates deck, that connection is clear.

“One of the most significant selling features of the project is Park Point’s location on the beautifully manicured and historic Central Memorial Park,” says Mahboubi. “It is a very valuable visually amenity and backdrop to the building amenities, particularly the view outlook from the indoor/outdoor yoga/pilates areas and the gym and all suites that have a view of the park.”

“We believe that the proximity of the Park Point residential community on Central Memorial Park directly correlates to a healthier lifestyle and the propensity for homeowners to increase their physical activity, either within the project utilizing the building amenity areas, or encouraging them to walk across the street to the Central Memorial Park,” he adds.

Both the high-end lobby and building’s zen garden are also starting to take shape.

The double-height lobby will boast seating, a stone reception desk, marble flooring, and a luxurious leaf-inspired chandelier above it. There’s a stand-alone wall behind the reception desk wrapped in polished black marble.

At the Zen Terrace — located on the second floor rooftop — placement of the plants give an early taste of what the space will provide residents. Mahboubi says the intention is a “retreat.”

“Three boulders are positioned within a large pan acting as the centrepiece of the Zen Terrace,” he adds. “Each boulder will have a spout sprinkling water out the centre. The boulders are surrounded by a garden with a number of landscape planters in a manicured setting

View this article in PDF  by Josh Skapin of Calgary Herald