The MARK of a winner 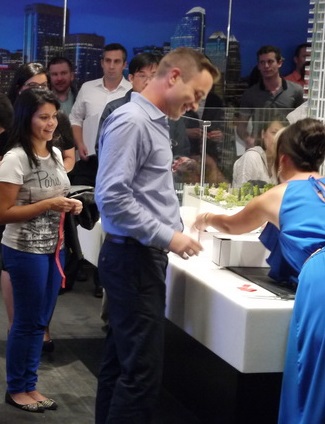 Mark on 10th marked the closure of its sales centre every bit as spectacular as when they opened it, by giving purchasers a chance to win some of the high-end furniture that was used to decorate the sales centre. Some $20,000 worth of their staging furniture were given away to MARK on 10th buyers during a draw marking the closing of the sales centre.

“This was one of our most successful developments ever, and it just seemed right to hold a special event to say thank you,” says Parham Mahboubi, vice president, planning and marketing at Qualex Landmark, MARK on 10th’s developers.

“The project sold out less than one year after construction began. This rate of absorption is uncommon in the industry, so we’re absolutely thrilled about it,” he says.

It also served to whet appetite for their yet-to-be-launched Park Point two condo towers that will be located along 12th Avenue S.W., across the street from the historic Central Memorial Park. The first 34-storey high-rise will have 286 units, a mix of one- and two-bedrooms plus den and live-work townhomes that will be launched in early 2015. “The Park Point Discovery Centre is currently under construction on the north portion (Tower 2 portion) of the development site,” Mahboubi says.  Park Point will mark Qualex-Landmark’s sixth residential condo tower in the heart of Calgary’s Beltline Community.