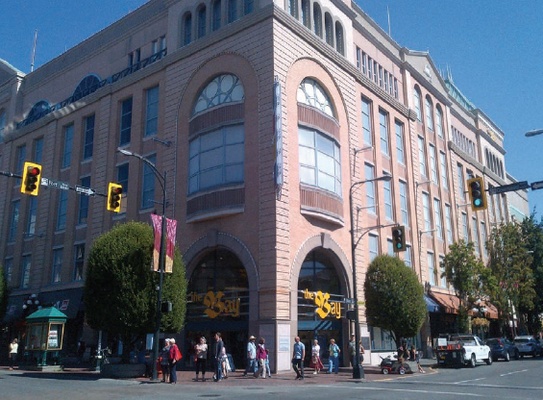 Chalk up another major deal for downtown Victoria: with last year’s sale of the Fairmont Empress Hotel to Nat Bosa rocking local real estate charts at $50 million, this year has started with a deal for more than double that price with Manulife’s Standard Life Real Estate Fund acquiring the Bay Centre at 1150 Douglas Street.

While the deal’s exact value isn’t disclosed, the Westcliff Group and LaSalle Investment Management acquired the 407,000-square-foot property in 2010 for approximately $90 million. BC Assessment records peg its current value at $97.5 million. CBRE Ltd. reports that Canada’s pension funds are boosting their investment in real estate, competing with other investors to place capital in a limited supply of assets. Competition means a value north of $100 million for the Bay Centre is not improbable. (Manulife declined comment.)

Tourists are a key source of shoppers, and Avison Young principal Michael Gill, who with principal Bob Levine brokered the off-market deal, said Manulife is counting on this strength combining with proposed zoning changes in Victoria’s downtown to buoy the mall’s fortunes in the years to come.

“[Manulife’s] buying it for the long term,” Gill said. “They recognize that over the next decade or so the fortunes of Victoria are going to improve and this property will benefit, being right in the heart of the activity.”

There’s been plenty of angst in the media about the downturn in oil prices, and for those affected by layoffs the impact is no laughing matter.

But the effects on the real estate sector, which seems to grab the headlines when economic shocks hit, are somewhat like the reported death of Mark Twain.

“The outcomes are really exaggerated in the headlines,” quipped Eric Carlson, president of Anthem Properties Group. “My anecdotal data is ‘cautiously OK’ – we’ll get through this.”

Indeed, the benchmark price for homes in Calgary slipped just $200 between November and January, hardly a collapse even if sales activity has pulled back.

Buyers are being “intelligently cautious,” said Carlson, who saw strong demand for Anthem’s Waterfront project in the Eau Claire district last fall and since mid-January has sold 14 of the project’s remaining units.

“We’re still doing business, there’s still well over a million people here and they’re still employed,” he said. “We’re still pumping a lot of oil out of Alberta. That economy is still there.”

Similarly, Parham Mahboubi, vice-president, planning and marketing, with Vancouver’s Qualex-Landmark Group, is working on a fifth tower in the city’s Beltline area and preparing for a sixth.
“There is no question that the Calgary economy is closely tied to the energy sector; however, its economy is not as vulnerable to fluctuating oil prices as may be public perception,” he said. “We need to keep in mind that oil prices will not remain low forever.”

That’s also the faith of James Askew, president of RareEarth Project Marketing Ltd., which is expanding to Calgary later this year to handle a second project in the city for Vancouver’s Ledcor Properties Inc.

“The fundamentals are really there for Calgary, overall,” Askew said. “If you need to sell right now, it’s probably making you very nervous. But if you want to buy, there’s tremendous opportunities that will be out there over the next three to eight months.”

Projects in the Okanagan are taking fears of knock-on effects from Alberta’s turmoil on the chin. Greyback Construction Ltd. and PIB Development Corp. are planning to launch sales for the second and third phases of the Skaha Hills project in Penticton by summer; farther north in Kelowna, Mission Group Homes LP’s 66-unit U-One project near the University of British Columbia Okanagan campus is 87% sold.

Pitched to prospective purchasers as a rental play that could net investors $400 a month profit on a three-bedroom unit; a dozen units have sold over the course of the past month.

The sales gave Mission Group the confidence last week to announce the first phase of U-Two, an adjacent project that will ultimately have 112 units divided equally between two phases.

By Peter Mitham for Business Vancouver