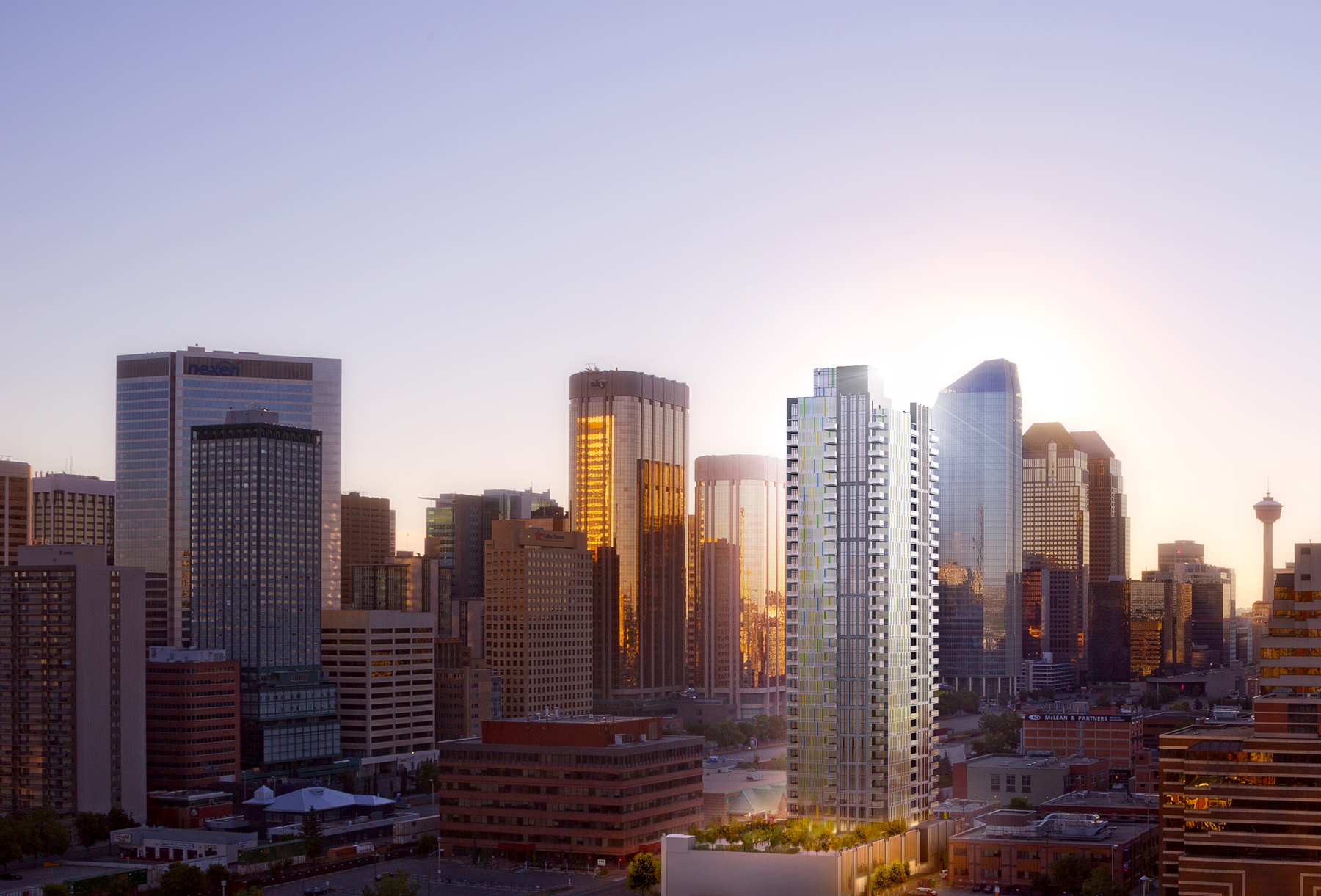 Mark on 10th, in the Beltline

As 2015 quickly comes to a close, one can’t help but reflect on Calgary’s evolution over the past year from an urban living perspective.

While the news on the economic front has continued to worsen, from an urban residential development perspective, things have continued to evolve pretty much as predicted.

In fact, a record six new high-rises were completed in 2015 — First, Fuse, The Park, Outlook at Waterfront, Guardian I and Aura II. The previous record was five in 2008 and again in 2010. Perhaps even better news, another six are anticipated to be completed in 2016.

The boldest condo announcement in 2015 was Knightsbridge Homes’ and Metropia Urban Landscapes’ plan for a 167-unit condo in East Village with no parking. Not only did they announce their innovative project, but they got approval, sold out and started construction all in 2015.

This year, several abandoned projects from the 2007/08-mortgage collapse morphed into new projects. Remember Astoria, the condo tower with its $10 million penthouse (on 9th Avenue between 8th and 9th streets) that was abandoned when it was just a big hole in the ground? That has since been taken over by WAM Development Group and will be two towers of 17 and 34 storeys. This development will nicely integrate with Qualex-Landmark’s Mark on 10th at the corner of 10th Avenue and 8th Street S.W.

As well, just a little further west at 1235 11th Ave. S.W. (the old Kai Tower project, named after Kai Mortensen Fine Furniture that used to be on the site) has evolved from initially being two vertical towers (Oslo and Copenhagen) into a single 13-storey horizontal building called Metropolitan by Statesman.

Further east in Victoria Park, Arriva, on the historic Victoria Park School site, was supposed to be an avant-garde, three-condo tower complex. However, it was abandoned after the first tower was completed. Since then, Hon Towers Ltd. picked up the pieces, redesigned the remaining two towers as two 44-floor South Beach-like white towers that will be the highest in Calgary. Rebranded as the Guardian Towers, the first tower is nearing completion while the second tower is more than half finished.
And in the heart of the Beltline at Memorial Park, Lake Placid Group of Companies completed The Park condo after a few years of no construction. Across the street from Memorial Park, Qualex-Landmark has also broken ground for the first tower of its two-tower Park Point project, sure to become one of the Calgary’s signature buildings.
It also looks like Strategic Group will be reviving the Sky Tower site at the corner of 10th Avenue and 1st Street S.E., having recently received approval for a 277-unit residence.

Ian Meredith, a consultant at Altus Group Ltd. Residential Advisory Services, doesn’t expect to see any of the projects currently under construction to have financing issues given “the institutional level of investment at play now simply wasn’t present during the last downturn. Over the past five years, Calgary has attracted most of the significant high-density developers from across Canada. Even during a slower growth period there will be no shortage of long-term interests pushing towards the successful redevelopment of our inner city communities.”

The Bridges (site of the former Calgary General Hospital site) redevelopment also came to a grinding halt in 2008, but gradually the entire Bridgeland/Riverside community is blooming into a lovely urban village.

Vancouver’s Bucci Developments has been the “King of Bridgeland” for many years. Back story: Owner and president Fred Bucci’s father, the founder of the company, was actually born at the Calgary General Hospital and grew up in the neighbourhood.

Bucci Developments not only built Bella Citta (2003) and Bella Lusso (2006) as part of Phase 1 of The Bridges, but also built Next (4th Street and 7th Avenue N.E.) nearby. Their new Bridges project Radius, planned for the southeast corner of Centre Avenue and 8th Street N.E., will have a lovely view of The Bridges’ Central Park. In addition to the 200 new homes, Radius’ modern design will add a new dimension to The Bridges with its rooftop terrace and garden.

As well, not only has GableCraft Homes’ modified Bridgeland Crossing II (mothballed for a few years) now nearing completion next to the LRT station, but they have also started Bridgeland Hill condos.

Not to be left out, Remington Developments’ new Meredith Block (office/retail) on Edmonton Trail just past Memorial Drive is further evidence that Bridgeland/Riverside is starting to bloom as Calgary’s newest vibrant urban village.

Urban Living comes to the Northwest

The biggest urban living announcement in 2015 was the City’s approval of University District on the University of Calgary’s west campus land around the Alberta Children’s Hospital. They are already moving dirt on this 184-acre urban village (Calgary’s first 24/7 village given it will serve two hospital sites), that will include 6,000 multi-family residential units (home for about 15,000 people), 245,000 square feet of retail and restaurants in a Kensington-like pedestrian streets and 1.5 million square feet of office space for about 10,000 workers. University District also includes 40 acres of parks, ponds, gardens and plazas and 12 kilometres of pathways. It holds the distinction of being the first ever new, master-planned urban village in Calgary’s northwest quadrant.

On a smaller scale, but still significant the Kensington Legion site redevelopment in West Hillhurst along Kensington Road at 18th Street N.W. has been called a “game changer.” Truman Homes announced plans in 2015 to transform this large site into a mixed-use site with two buildings, a four-storey office building and an eight-storey condo, both with restaurants and retail at ground level. While there has been much controversy over the height of the condo building, everyone seems to agree the design of both buildings, especially the condo building with its cascading north facade, are very attractive. It could well become the poster child for the City of Calgary’s Main Street program (which includes Kensington Road from 14th Street to Crowchild Trail) and become the catalyst for the evolution of West Hillhurst into Calgary’s next vibrant walkable community.

In a recent full-page sponsored content feature by Qualex-Landmark in the Calgary Herald, comments made by Parham Mahboubi, vice-president of planning and marketing with Qualex-Landmark, resonated with me and bear repeating.

“As developers, we have our sights on the long-term horizon. I think this is something like the sixth temporary economic downturn Calgary has faced in over the past 30 years. It’s a cyclical market. Calgary has so much going for it that makes it one of Canada’s major metropolitan cities. We are not throwing in the towel. We will continue to respond to the ongoing demand for quality, high-density, inner-city communities by building new condos to further demonstrate our commitment to renewing the economic, social and cultural vibrancy of Calgary’s Beltline.”

This aptly captures the essence of what I have repeatedly heard from dozens of residential developers over the past year. Well said, Mr. Mahboubi!