A commute measured in steps 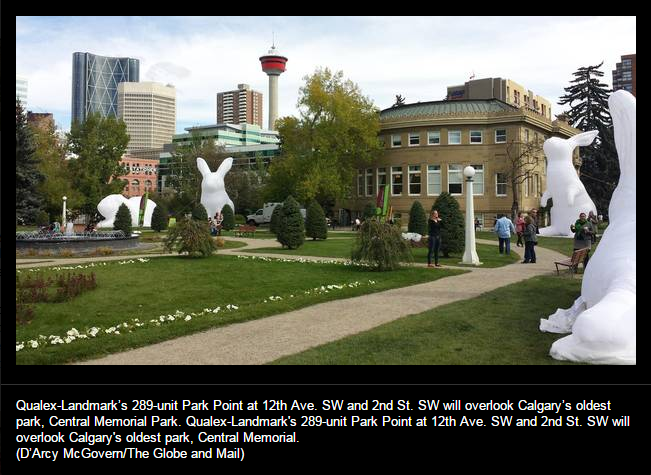 At a time when Calgary’s oil-splattered economy is struggling, high-rise developer Qualex-Landmark has decided it’s time to test the live/work waters with its most recent project.

The Vancouver-based development company with deep ties to Calgary’s Beltline district, located on the shoulder of the city’s downtown, has designed eight two-storey, street-level townhouses as part of its mixed-use 289-unit Park Point tower to cater to what company officials see as an emerging market.

“We have found that millennials have demonstrated the most interest in the live/work concept,” says Mohammed Esfahani, president of Qualex-Landmark.

He attributes this to the departure from the traditional “commute to work” model.
“As urban living continues to gain popularity in Calgary, if given the option, young ambitious professionals seem to really ‘get it’ and have jumped at the opportunity to invest in real estate that offers them the flexibility to work from their urban home,” Mr. Esfahani says.

A Statistics Canada report in 2011 found that more than 42,000 Calgarians spent the majority of their working day at home. Across Canada, the work-at-home figure was in excess of 1.1-million, or about 7 per cent of the work force.
Mr. Esfahani says the company has seen how well the live/work concept works in other major metropolitan cities in the country and wants to target that market in Calgary.

“It would be reasonable to suggest Calgary is playing catch-up with the other major Canadian cities in terms of the live/work lifestyle, but that doesn’t mean those cities have everything completely figured out,” he says. “It just means the concept has more firmly taken shape in cities like Toronto and Vancouver.”

The builder envisions a wide range of potential businesses making use of the 1,025-square-foot live/work townhomes in Park Point, including small offices or accounting firms, art studios and galleries. The required city zoning approvals are all in place.
“It is a permitted use in the zoning bylaw allowing a homeowner to run a legitimate business with hired staff and exterior business signage. It also permits the public to enter the suite without contravention of any of the building’s strata or condominium bylaws,” Mr. Esfahani says.

But one of the biggest selling points, Mr. Esfahani says, is simply the convenience of being able to work from home.
“You can literally walk downstairs and be at work; you save time and money,” he says. “We’re offering an opportunity to balance the demands of family life and professional goals.”

But there are additional personal and financial benefits to working out of the home.
Mr. Esfahani points to increased productivity, claiming part of the home as a tax deduction, staying at home with a growing family and thereby reducing daycare costs, and cutting automobile fuel and maintenance costs.
The townhouses at Park Point have two bedrooms on the upper floor, two baths and a spacious patio in six different floor plans priced from $680,000.

Park Point becomes the eighth project for Qualex-Landmark in Calgary’s Beltline district and, says Mr. Esfahani, is further proof of the company’s faith in the Calgary market. Four months after sales were launched, Qualex-Landmark says one-third of the units have been sold.

Mr. Esfahani says the whole real estate sector is “feeling the pinch” from Alberta’s economic downturn, but Qualex-Landmark is taking a longer-term view.

“Calgary is famous for swings in the economy and over the mid-to-long run, we believe the future of real estate in Calgary is going to be very positive, as has been demonstrated in the past,” he says. “We have a long-term vision for our future in Calgary, and have no intention of slowing down.”