MARK on 10th gives condo dweller a view at the top of the world.

The view from Blair’s 10th floor downtown condo is pretty spectacular, but it was a different vista that sold him on moving to MARK on 10th. The Beltline condo tower by Qualex Landmark™ was one of many that

Blair checked out as he looked to move from the northwest suburb of Panorama Hills to the core.
It was the 34th floor that did it for him, he says. “It was the amenities on the top floor,” Blair says. “There is no other building in the downtown like it.” 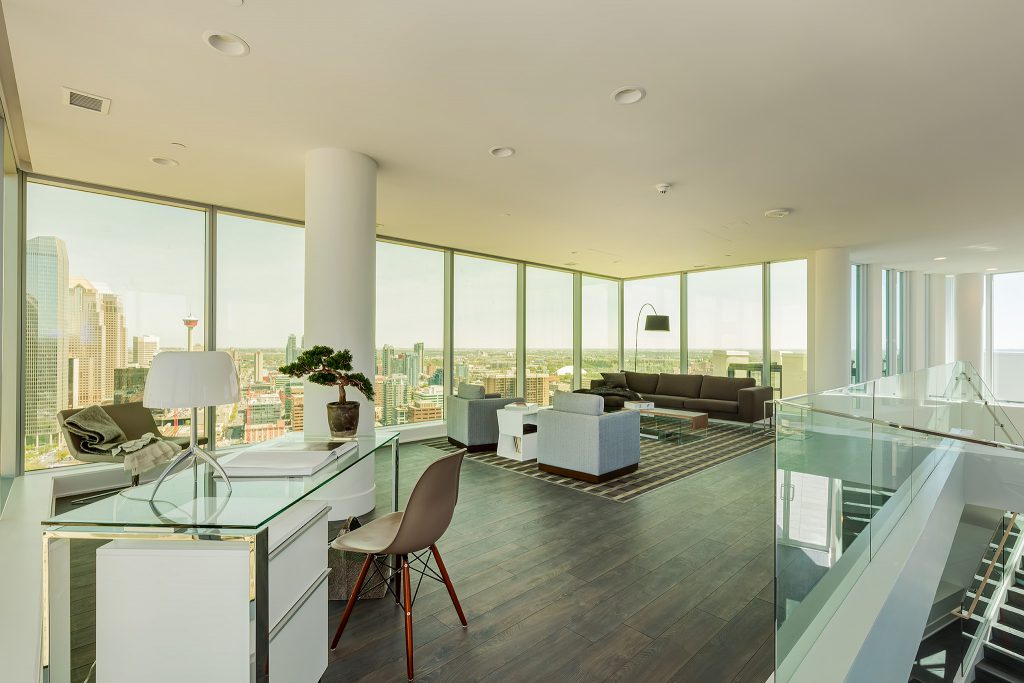 The top floor amenity space at MARK on 10th.

High-rises usually devote their highest floors to multi-million dollar penthouses, MARK on 10th’s is instead designed to give residents a one-of-a-kind indoor/outdoor amenity space that allows each and every resident (and their guests) a 360-degree view of Calgary’s picturesque cityscape.

The lounge area has a 70-inch flat screen television, a pool table and bar area, and above that is a second loft area. The entire area is enclosed by floor-to-ceiling windows for a high-def, panoramic view of not only the downtown core, but the surrounding Bow River valley and the Rockies to the west. The garden rooftop space looks like a chic restaurant patio with tall white walls and black-framed windows with a fire pit, banquet table and barbecue.

Blair says the rooftop spot makes an impression on everyone. “My friends are already asking me if they can have their birthday here,” he laughs. Blair says he has already taken full advantage of the other amenities, like the outdoor hot tub and the wet and dry saunas. “I go up before bed and get in the hot tub,” Blair says. “I can chill out and shut my brain off.”

Blair’s apartment and the amenities area are on the east side of the building, which has no other high rises to block the horizon. “Its an amazing view — this is my backyard,” he says, gesturing to the downtown skyline. What led Blair to the downtown is a mix of practical necessity and the completely unexpected. He was living in a 2,300-square-foot condo in Panorama with his then partner, who had a northwest business. A change in his relationship status, a downtown job and a new couch had him thinking of seriously downsizing in the downtown core.

Blair works at Swizzlesticks in Kensington and knew he wanted to ditch the commute and move closer to work. “It’s more commute-friendly for me,” Blair says. “The walk straight up 10th Street to work now only takes 10 minutes,” he says. Blair was able to buy an underground parking stall for his own car, he says and uses Car2go when he needs to get to the airport for his many travels.

But it was really a piece of furniture he had on order that had him thinking about seriously simplifying his living space. “This couch is my favorite thing,” he says of the blue-green, tufted two-seater. “It reminds me of something you’d find in your grandma’s basement. When I got this at EQ3 it wasn’t being delivered for four months and that is when I decided I needed a space that would fit this couch. I thought I have to find a home for this.”

The retro-contemporary piece didn’t need a lot of room and so a 498-square-foot one bedroom, one bathroom apartment on the 10th floor was a fit for Blair and his couch. “It’s so compact,” he says of the apartment. “It’s perfect for one.” The contemporary styling of the apartment was the change he was looking for, Blair adds. “I definitely wanted to do something more modern and clean,” he says.

Features like all white walls, countertops and baseboards create a bright and modern look that he complimented with white framed photos with the insignia of his favourite designers (Chanel) and actresses (Cara Delevingne). The couch wasn’t the only new addition he needed to furnish his apartment. “I had to get rid of everything,” Blair says. “I had to start completely over.”

A steel and glass coffee table mirrors the steel and glass buildings outside. Blair ordered a metal industrial chef’s island from Cookbook Cooks up the street. He says local shops have been his go-to for new décor and furnishings. And although he loves his modern kitchen with, he says the temptation to eat out has been too great so far to take full advantage of what he has at home.

For now, he says he loves that the refrigerator and dishwasher are integrated into the flat-grey cabinets that keep the kitchen clean and minimalistic. His bedroom is one spot that he added a touch of colour with three art prints above his bed. The admittedly small space still works, due largely to two sliding frosted glass pocket doors that divides the living space from the bedroom but leaves it feeling airy and open.
Qualex Landmark™ has been key in modernizing the Beltline, providing some of the most modern condo options here, including Nova, Stella, Luna, Calla, and MARK on 10th. This continues with their Park Point twin high-rises along 11 Avenue S.W.