Park Point poised to be ‘a landmark’ of neighbourhood 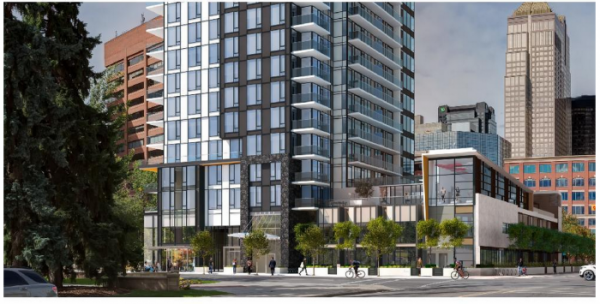 At 34 storeys, the Park Point condo tower will be the tallest building in the area.

B.C.-based Qualex-Landmark has launched a two-tower condo project next to Central Memorial Park.

Sales are underway at Park Point, with prices from the $280,000s.
This development follows the company’s other condo developments in downtown Calgary. They include Mark on 10th, Calla, Luna, Nova and Stella.

“Calgary has a robust economy and is a business leader, with a healthy employment sector and population growth making it low risk for investors relative to other cities i

n Alberta and even across Canada,” says Parham Mahboubi, Qualex-Landmark’s vice-president of planning and marketing.
Earlier this year, Qualex-Landmark announced it had purchased its seventh parcel of land in Calgary’s Beltline district, a 0.3 hectare site on the corner of 11th Avenue and 12th Street S.W.

“We’re confident in Calgary’s real estate market,” says Mahboubi. “Despite the temporary economic challenges, we believe there’s still good demand for condos in Calgary, so we’re here to stay.”
The first tower at Park Point is mixed use and stretches 34 storeys. It will offer a range of floor plan options from one- and two-bedroom condos. There are also penthouses and street-level, live/work town houses.

Park Point features striking architecture, says Mahboubi. “The towers are designed as one complete architectural expression, which offers viewers from Central Memorial Park the opportunity to admire Calgary’s most modern urban residence in its entirety, without other buildings obstructing the view,” says Mahboubi. “Park Point will be a landmark of the neighbourhood and the tallest building in the immediate vicinity.”
Eye-catching views of the nearby green space holds great appeal, Mahboubi says. South-facing condos will have a two-bedroom orientation and overlook Central Memorial Park. West-facing condos are of the one-bedroom variety and will provide partial views of the park. North, east and west-facing units will also boast sight lines of the Calgary skyline and/or the Rocky Mountains.

Residents will admire these views through energy-efficient, doubleglazed windows. These condos also feature Liebherr and AEG appliances and Armony Cucine cabinets and come with modern Hansgrohe tapware in the kitchen and bathrooms, undermount sinks, superior task and a high-performance bath, shower and storage systems.

A sales centre with two show suites is located at 301 11th Ave. S.W. One of the show suites displays a one-bedroom option and the other is a two-bedroom orientation.

The sales centre is open noon to 6 p.m. from Monday through Thursday and noon to 5 p.m. on weekends. Visit qualex.ca/parkpoint.

By: Josh Skapin for Calgary Herald