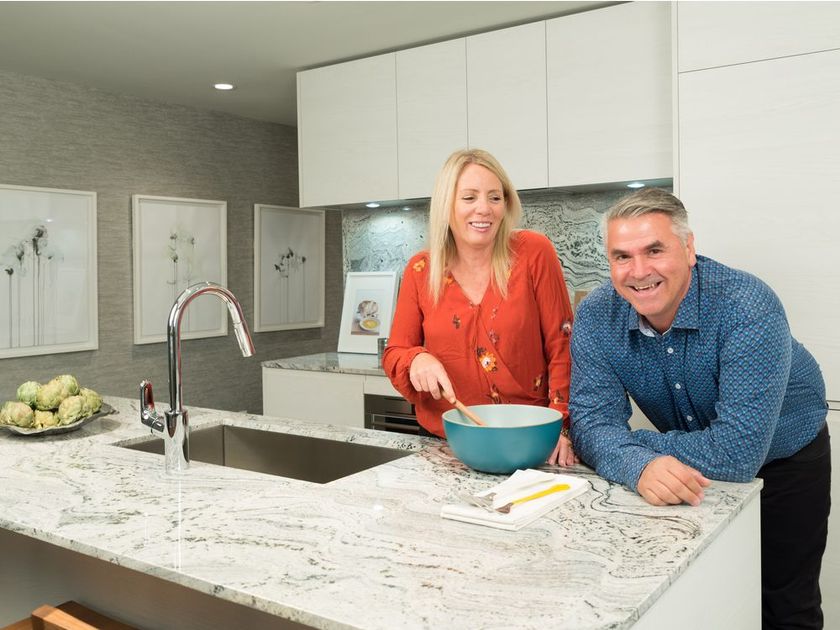 Julie and Dale Sawchuk bought a condo at Park Point. DON MOLYNEAUX CALGARY HERALD
While Dale and Julie Sawchuk’s house is on the southwest end of the city, Calgary’s downtown and inner-city has been like their second home.

“Almost every weekend, we end up somewhere downtown,” says Dale, who works in sales. “Calgary is getting more active downtown … it’s coming back to life.” “You’ve got your Lilac Festival, your Inglewood Festival, even things that people don’t realize, you’ll walk 8th Ave. and there will be some event by City Hall,” he adds.

They’re also fans of relaxing walks across the Peace Bridge, nearby parks, and sampling Calgary’s burgeoning restaurant scene near and at the core, as well. So when the Sawchuks decided it was ready to downsize from their single-family home, a place in the inner-city made sense.

They turned to the Beltline district, buying a penthouse at Park Point by Qualex-Landmark. With this development, the B.C.-based company adds to its previous work in Calgary, consisting of Mark on 10th, Calla, Luna, Nova, and Stella.

The current starting price at Park Point is $274,000 before tax, with estimated condo fees at $0.48 per square foot. Floor plans ranging from 500 to 1,340 square feet. The development is now more than 70 per cent sold.

“We looked at quite a few locations within downtown … and this one just spoke to us right away,” says Dale. “I like that it’s central. There’s a beautiful park right across from there, the restaurants, you’ve got 4th Street and 17th Ave. right there.”

The couple already spends time at the park, and looks forward to many morning coffees there, having it only a few steps away, says Dale. Beyond location, the Park Point development gave them something special. “The whole layout of the building, the amenities — comparing to other buildings, we think they’re higher up, and the finishes, they’ve just done a fabulous job.”

Residents of Park Point will have access to on-site features such as a park-facing yoga and Pilates studio, fitness facility, steam room, and sauna, along with men’s and ladies’ change rooms with showers.
There will be an outdoor amenity space, planned to include what the developer dubs a Zen Terrace, with seating, a water feature, social air lounge seating with a barbecue area, fire-pit, harvest table, and sundeck. There’s also a fully-furnished indoor social lounge with a cozy fireplace.

“I have belonged to gyms but the timeframe to go and use (the equipment) — here it’s so convenient, if you want to go for 10 minutes or 15 minutes,” Dale says. “They thought of everything.”

The couple’s penthouse is 1,630 square feet with three bedrooms, allowing space for their adult daughters to stay when they visit. It also boasts two expansive spaces to enjoy the sweeping sight lines from its soaring perch.

One of the balconies faces downtown and the other looks toward the Rockies. “I like Stampede but it’s one week a year. The mountains are forever,” Dale says. With the penthouse, the Sawchuks will never be in need of a place to store their vehicles. They have a two-car garage within the underground parkade, along with a separate parking stall. But based on the Beltline’s walkability, Julie is considering going without a vehicle after moving to Park Point.

The Sawchuks were also impressed with the exterior design of the tower itself. “It’s not just a piece of glass. It has texture and movement to the building,” says Dale. In fact, the developer recently celebrated the completion of the concrete structure of the 34-storey high-rise.

“Ward 8 sees more development than almost any other part of Calgary,” says Ward 8 Coun. Evan Woolley in a news release. “Even in tough economic times, our neighbourhoods are focal points for our changing city, and they attract investors from all over the world. I am pleased to see Qualex-Landmark hitting this major milestone on yet another striking Beltline condo tower.”

Shovels turned for Park Point in autumn 2015, with about 170 to 200 workers currently on site.
“We are thrilled to be delivering another iconic residential condo tower in Calgary’s Beltline community, and we look forward to welcoming our homeowners next summer,” says Qualex-Landmark’s president Mohammed Esfahani.

The developer first approached Tony Wai, lead architect for IBI Group, the firm behind the architecture of Park Point, about the tower 4.5 years ago. “Qualex-Landmark didn’t just want a building that would fade into the background. They wanted something that would stand out from the rest of the towers and in their own words, they wanted to redefine the Calgary skyline,” says Wai. “I took that to heart.”

Many buildings near Park Point have a tapered approach to the design “where the top floors of the towers are smaller to create a wedding cake affect,” says Wai. “To redefine the Calgary skyline, we did the opposite,” he adds. “We placed the largest floor plate on the top portion of the tower and as we descend, the tower floor plates get smaller and smaller.”

Going this route provides multiple benefits. Wai says it offers more density to the higher floors and as the tower steps back, it gave potential buyers more variation in the condo layouts. “And as a designer, it gave me the right to be more creative,” he adds. “We cladded the top portion of the tower, which is the biggest portion, with black spandrel  glass. As we stepped it back, we changed the black glass to white. That expression is in the building façade. As it descends, the floor plate gets smaller and comes to a point at the base of the building, which points to the lobby of the residential entry.”