COVER | Condo developer, retail REIT forge ahead with giant projects and say this is the time to be investing in Alberta’s largest city.

…from his downtown Vancouver office, Mohammed Esfahani confirms he has pre-sold 140 condominiums at his luxury Park Point tower in Calgary in the past year, 10 in the past month, at an average of $610 per square foot. “We are not afraid,” said Esfahani, a partner in Qualex-Landmark which broke ground last October on its 34-storey, 289-unit Park Point next to Calgary’s Central Memorial Park as its flagship and only project.
He is confident the tower will sell out before it opens in 2018.
“Our buyers are not investors,” Esfahani said. “They are looking for homes with quality and a great location, and they are in for the long term.”
Park Point is Qualex-Landmark’s sixth condo tower in Calgary’s Beltline and one of the largest residential projects underway in the city. 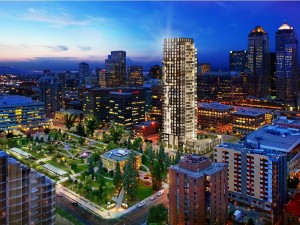 The Park Point tower will ascend 34 storeys in downtown Calgary.
When finished, it will have a mix of one-, two-and three-bedroom suites, as well as street-level livework townhomes. Designed by Vancouver’s IBI Group, it will also feature a private terrace
with water feature, indoor and outdoor social lounges with fireplace, a firepit and barbecue area,
a fully equipped fitness facility and steam room, free Wi-Fi and a fully furnished guest suite. The project has already won international design awards.
And it will complete, Esfahani said… “We have always completed everything we have started,” Esfahani said….